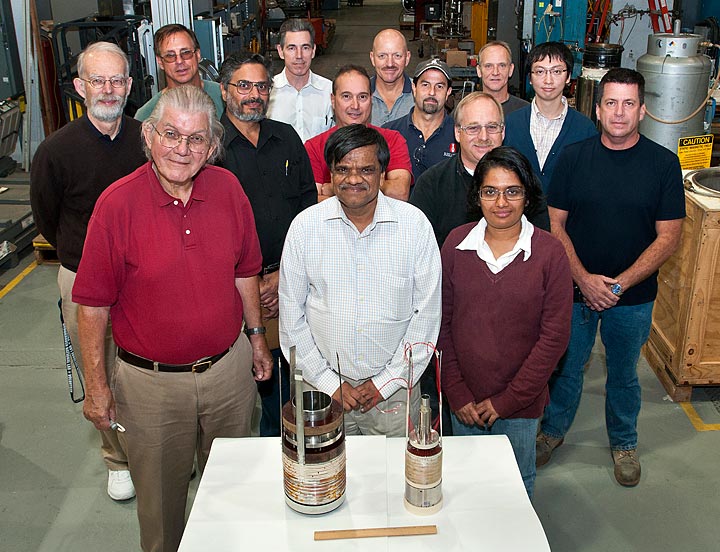 World records have been broken this year not only in sports by Olympic athletes in London, but also in high temperature superconducting magnet technology by the Superconducting Magnet Division (SMD) staff at BNL.

Superconducting magnets, which are essential in accelerators like the Relativistic Heavy Ion Collider (RHIC) and the Large Hadron Collider (LHC) in Switzerland, are made with conventional, low temperature superconductors and require cooling by liquid helium, now in short supply. They operate at temperatures below 5 Kelvins (K) (-450 degrees Fahrenheit) and magnetic fields below 10 Teslas (T). For the past decade, however, Lab researchers have explored a new class of superconductors called high temperature superconductors (HTS) that can operate at temperatures as high as 77 K, achieved by cooling with cheap, plentiful liquid nitrogen, or can create very high magnetic fields — more than 20 T — when cooled to about 5 K.

“Brookhaven was one of the first national laboratories to start research and development [R&D] on HTS magnets at a time when there were many skeptics,” said Peter Wanderer, who heads the Superconducting Magnet Division. “We were encouraged by BNL management to take on this exploration, which has been well rewarded. Recent success at BNL has advanced the technology to a level that HTS magnets are now being considered seriously in the upgrade of current accelerators — for example, the LHC — and future accelerators, such as a muon collider.”

“We are fortunate to have a very skilled and creative team of scientists, engineers, and technicians contributing to this pioneering HTS magnet R&D,” said Ramesh Gupta, who heads the HTS Magnet R&D group. “William Sampson, a senior scientist and winner of the IEEE award for Applied Superconductivity Research, plays a key role.”

Since 1969, scientists have been interested in the idea of colliding muon particles, which because of their unique properties, could reveal new physics. With the discoveries of a Higgs-like particle at the LHC, there has been renewed interest in a collider using muons because they would be well-suited to detailed studies of these particles.

However, several required technologies for muon colliders are not yet developed, according to Robert Palmer of the BNL Physics Department, who has been working on a muon collider for many years. One challenge has been to develop extremely high field superconducting magnets — 30 T or more — that are essential for achieving high luminosity, a term related to having a sufficient number of collisions.

For this purpose, the past achievements of Gupta’s group developing solenoid coils of 9 T and 16 T peak fields are very promising.

“In the next step,” said Gupta, “we will put the two record-breaking solenoids together and add a few more coils. If all goes well, we will reach more than 20 T.”

These magnets are being developed as a part of a collaboration with Particle Beam Lasers, Inc. through the Small Business Innovative Research program. The high performance conductor material is provided by SuperPower, Inc.

Gupta explained that reaching 20 T with HTS alone will be an important milestone in the technology. This, when combined with a solenoid of about 10 T made with conventional superconductors, offers a clear path to 30 T.

Rather than developing a program that is narrowly focused on a single design or application, the group is taking advantage of the unique properties of HTS for developing technology for a variety of applications.

Among these is a low field (below 1 T) HTS solenoid operating at about 20 K for the BNL Energy Recovery Linac, being built in the Accelerator R&D Division of BNL’s Collider-Accelerator Department. A medium field magnet (2-3 T), subjected to extremely high radiation and heat loads has been developed for the Facility for Rare Isotope Beams (FRIB), planned for Michigan State University. The FRIB magnet has demonstrated stable operation at high temperature (30-50 K) with record heat loads. These demonstrations have led to making HTS magnets, for the first time, part of the baseline design of a major accelerator facility.

A major challenge with any high-field magnet is dealing with the large stress and strain on the conductors created by huge magnetic forces. To overcome this, the Magnet Division’s mechanical engineering group, led by Michael Anerella, is building a special segmented support structure for high-field magnets.

Another major R&D effort is to protect HTS coils from permanent damage in the event of a “quench,” or a sudden loss of their superconducting properties.

“Piyush Joshi has developed new fast electronics that detect small changes in voltages even against the large background noise and large inductive voltages,” said Gupta. “This development has so far proven to give enough warning to shut down the system and extract the stored energy, but significant work still remains for large systems.”

HTS Magnets in Other Applications

While successful development of HTS magnets is expected to revolutionize accelerator technology, it is likely to have a major impact on many other fields as well. These include magnetic levitated trains (Maglev), magnetic resonance imaging (MRI) and other medical uses, nuclear magnetic resonance, energy storage, and national security.

Another significant project for the group is the design, construction, and testing of a large, about 25 T HTS coil for a high energy density superconducting magnetic energy storage (SMES) system. In this project, the Magnet Division is working with scientists in the Condensed Matter Physics and Materials Science Department to develop SMES technology in partnership with industry. This, if successful, will create a SMES system with energy density considerably greater than has been previously possible.