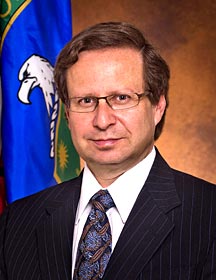 Steven Koonin, director, Center for Urban Science and Progress, and former DOE Undersecretary of the Office of Science, will speak on “The Promise of Urban Science” today at 4 p.m. in the Hamilton Seminar Room, Bldg. 555.

Koonin is interested in urban science and how it applies to problems of a city environment. For the first time in history, more than half of the world’s population lives in urban areas. In just a few more decades, 70 percent of the world’s estimated nine billion people will live in cities. Enabling those cities to deliver services effectively, efficiently, and sustainably while promoting and improving their citizens’ safety, health, prosperity, and creativity will be among the most important undertakings of this century.

All are invited to attend this free talk, which is open to the public. Visitors to the Lab 16 and older must carry a photo ID while on site.