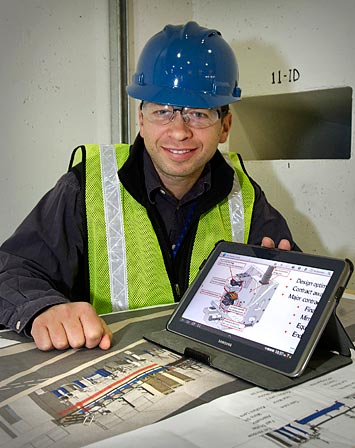 Andrei Fluerasu in front of the hollow duct where equipment will be installed to deliver X-rays for scientists' future, world-class research at the National Synchrotron Light Source II

Scientists often go to extremes as they delve into unseen parts of our world to improve the ways we live. They explore the properties of particles in nanoworlds measured in billionths of a meter. They use huge particle colliders and detectors to study what the universe may have looked like in the first microseconds of its existence. Not all scientific discoveries, however, occur at the smallest increments of a ruler or stopwatch.

The National Synchrotron Light Source II (NSLS-II) is a future facility at Brookhaven Lab that will provide some of the brightest light in the world for scientific research. Today at Brookhaven, some scientists are developing new tools for NSLS-II to study complex materials that are smaller than a living cell but larger than a chain of molecules. Scientists could use the results of research at this scale to control materials for new applications in fields such as biology, medicine, chemistry, environmental sciences, physics and materials science.

On Wednesday, Jan. 16, join Andrei Fluerasu of the Photon Sciences Directorate, for the 483rd Brookhaven Lecture, titled "Coherent X-ray Scattering: Dynamics of Crowded Colloids and Other Stories." All are invited to attend this free talk, which is open to the public and will be held in Berkner Hall at 4 p.m. Refreshments will be offered before and after the lecture. Visitors to the Lab 16 and older must carry a photo ID while on site.

To join Fluerasu for dinner at a restaurant off site after the talk, contact Jean Smiles (Ext. 4696).

During his talk, Fluerasu will discuss the benefits of techniques called coherent x-ray scattering and x-ray photon correlation spectroscopy for cutting-edge research at NSLS-II. He will then explain how these techniques and the future facility will provide unprecedented capabilities for studying the structure and dynamics of complex materials, including mixtures of nanoparticles, called colloids, as well as proteins.

Fluerasu earned a master's degree in applied physics from New Jersey Institute of Technology (NJIT) in 1996 and a Ph.D. in physics from McGill University in Canada in 2003. In earlier years, he did research and development with solid state gas sensors at GE Power in Canada. Fluerasu was appointed to several positions at NJIT, Rutgers University and McGill between 1995 and 2003 before he went to the European Synchrotron Radiation Facility in France. There, he rose from the role of postdoc to scientist and visiting scientist from 2003 until 2011. In 2009, Fluerasu arrived at Brookhaven Lab as an associate physicist and leader of the Coherent X-ray Scattering Group. He was promoted to his current role of physicist in 2011.