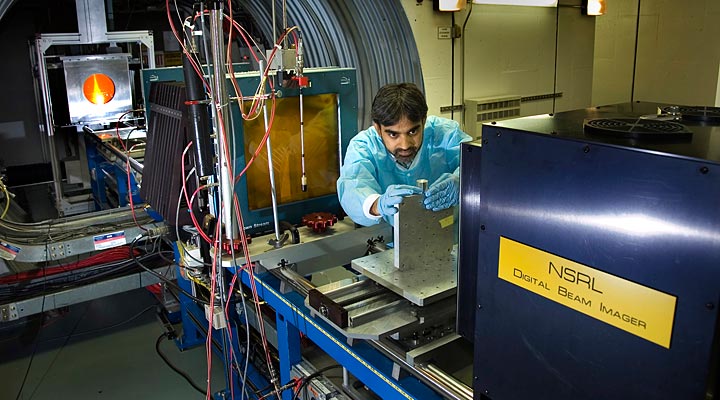 As Hurricane Sandy raged across the Northeast last October, NASA satellites tracked its progress, providing stunning and useful images of the storm from the cold safety of outer space. Meanwhile, a team of NASA-funded researchers on the ground raced against the clock to complete time-sensitive experiments as Sandy dealt unprecedented damage.

Scientists and staff at the NASA Space Radiation Laboratory (NSRL), located at the U.S. Department of Energy's Brookhaven National Laboratory, faced the challenges of the storm and managed to carry out important science before and after the hurricane hit. For these efforts, NASA awarded the NSRL team the Johnson Space Center Group Achievement Award for their "outstanding support and dedication in ensuring successful completion of the Fall 2012 Run, overcoming the difficulties imposed by Hurricane Sandy."

"Many of the staff were dealing with storm-related problems at home while they tried to juggle experimental concerns," Lowenstein added. "Their selfless dedication is what NASA recognized us for with this award."

Experiments at NSRL include bombarding biological cell samples with intense radiation in order to reproduce the effects of traveling through both deep space and low Earth orbit. The atmosphere on Earth protects us from the energetic cosmic rays produced in the heart of the Sun and in the supernova deaths of stars. But space explorers are extremely vulnerable to these high-charged particles. Using Brookhaven Lab's accelerator facilities, researchers are able to simulate those cosmic dangers and help prepare future astronauts for safe voyages. Unfortunately for the scientists, biological samples and natural disasters operate on their own schedules.

"With the impending storm and the high probability of disruption to the NSRL program, we needed to safely minimize the interruption of these sensitive experiments," said Derek Lowenstein, Associate Chair of Brookhaven Lab's Collider-Accelerator Department for Accelerator Applications and Education. "The NSRL staff and Brookhaven support staff came in on the weekends before and after the storm to complete all of the 19 rescheduled experiments without a loss of scientific productivity."

Unlike the subjects of many of Brookhaven Lab's physics experiments, the biology of living systems evolves over time—sometimes rapidly—and the timing of the NSRL radiation tests during specific development stages is critical. Major delays can result in a cell sample becoming unusable, which can affect past and future experimental plans. 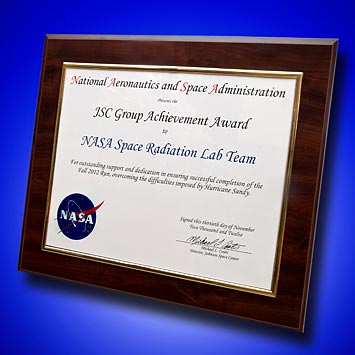 "Many of the staff were dealing with storm-related problems at home while they tried to juggle experimental concerns," Lowenstein added. "Their selfless dedication is what NASA recognized us for with this award."

In addition to the concerns of local staff, NSRL researchers throughout the country dealt with flight cancellations and uncertain travel schedules. This demanded flexibility among all the scientists to shuffle around time at the NSRL beamline to accommodate sudden departures and arrivals. The entire team of 40 individuals from the Biosciences Department, Collider-Accelerator Division, and the Radiological Controls Division all contributed to the successful completion of experiments that improve our understanding of the complex challenges of travelling through space.

"In the past, our staff has braved blizzards, hurricanes and nor'easters to keep the experimental program operating, but it is exceptional to be recognized by a funding agency for the effort," Lowenstein said. "That we were able to accomplish our goals safely amidst so much tragedy and chaos is also worth celebrating, and we are grateful to all who participated."