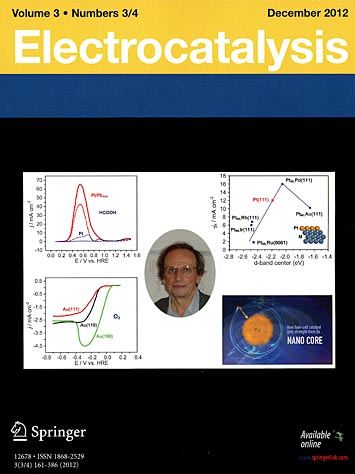 If you ever had the pleasure of working with Brookhaven Lab Senior Chemist Radoslav (“Ratko”) Adzic you would immediately understand why the journal, Electrocatalysis dedicated its December 2012 issue to a celebration of the 70th birthday of this outstanding Brookhaven Lab scientist.

Adzic began his career at the Institute of Electrochemistry at the University of Belgrade in what was then Yugoslavia. As a research director he began developing scanning tunneling microscopy, and has since become world renowned for his work and advances in the areas of electrochemistry and electrocatalysis.

Adzic’s research focuses on the correlation between structure and function at electrochemical surfaces using several techniques, including x-ray techniques at Brookhaven's National Synchrotron Light Source (NSLS). He has devised ways to improve fuel-cell electrocatalysis ─ to make catalysts that may be used to convert hydrogen to electricity in fuel cells for electric vehicles more efficient and less expensive. He also studies single crystals of materials in order to understand their structure.

“It is a privilege for Electrocatalysis to dedicate its very first special issue to Dr. Radoslav Adzic on the occasion of his 70th birthday. It is a pleasure for the Special Issue Editor and the Editor-in-Chief to jointly manage such an endeavor,” wrote Junliang Zhang and Gregory Jerkiewicz.  “The contributions of Dr. Adzic are not limited to electrochemistry and electrocatalysis because he is also a dedicated and inspiring educator.  Throughout his career he has trained numerous graduate students and postdoctoral fellows. Several of his past collaborators and group members have become highly accomplished and internationally renowned researchers occupying prominent positions in the academia, industry, and government laboratories.”

In a special dedication, Nenad Markovic, a colleague of Adzic’s from Argonne National Laboratory, wrote: “For Ratko, art is more than just an expression of humanity; he uses art as an inspiration. From paintings, he learns how to design catalytic active sites, while from music he learns how to orchestrate efficient bond-making and bond-breaking events. Ratko’s art-music-science approach is contagious and has inspired many of us who enjoy doing electrochemistry.”

Adzic graduated with a B.S. in chemical technology and a Ph.D. in chemistry from the University of Belgrade in 1965 and 1974, respectively. After leaving the University of Belgrade, he went to work at Case Western University. He joined Brookhaven Lab in 1979 as a visiting scientist, and was hired as a senior research associate in 1992. He was named chemist in 2001 and senior chemist in 2005.

In addition to his many scientific contributions, Adzic is also the recipient of countless awards, including being named “Inventor of the Year 2012” by Battelle Memorial Institute and the New York Intellectual Property Law Association. He and his research team won a 2012 R&D 100 Award from R&D Magazine for their work designing durable electrocatalysts for fuel cells. He received Brookhaven Lab’s Science and Technology Award in 2005 and the 2008 DOE Hydrogen Program R&D Award. He is also an elected Fellow of the Electrochemical Society and Fellow of the International Society of Electrochemistry.

Congratulations (and happy belated birthday) to this scientist who, in 2012, also celebrated 20 years at the Lab. He has made outstanding contributions to science.