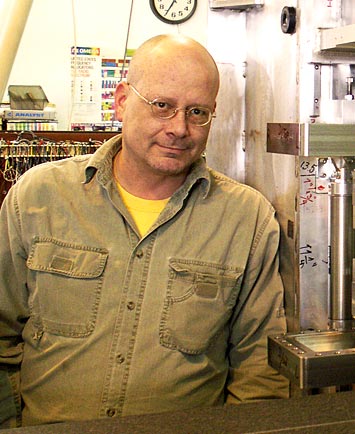 "Mike was a very clever technician whom I could count on to accomplish challenging tasks, such as tuning equipment for the X25-minigap undulator and assembling high-temperature superconducting magnet packs," said Toshi Tanabe, Lehecka's leader in the NSLS-II Insertion Devices Group. "His quick thinking and flexibility was a big asset for the Laboratory."

"Mike was a very versatile technician, skilled machinist and mechanic," said Todd Corwin, Lehecka's supervisor in the NSLS-II Insertion Devices Group. "His knowledge of insertion devices and experience with magnetic measurement techniques will be a loss for the Photon Sciences Directorate."

"With his background in toolmaking, vacuum technology and manufacturing engineering, Mike often came up with some of the best, simplest, and most producible hardware designs," said George Rakowsky, Lehecka's former supervisor in the NSLS Magnetic Measurements Group for more than 10 years. "He helped build, tune and measure the groundbreaking in-vacuum undulators, which have enabled NSLS users to do great science. We will all miss him."

Lehecka's colleagues in Bldg. 727 will also remember the things he shared: particularly the bluefish he caught and smoked, as well as the onion rye bread he baked.

Lehecka was the son of BNL retiree Theodore and Rosemary Lehecka, and is also survived by brother Stephen and sisters Susan, Patricia, and Fran. He was uncle to several nieces and nephews. He was buried at St. Lawrence the Martyr Cemetery in Bohemia.