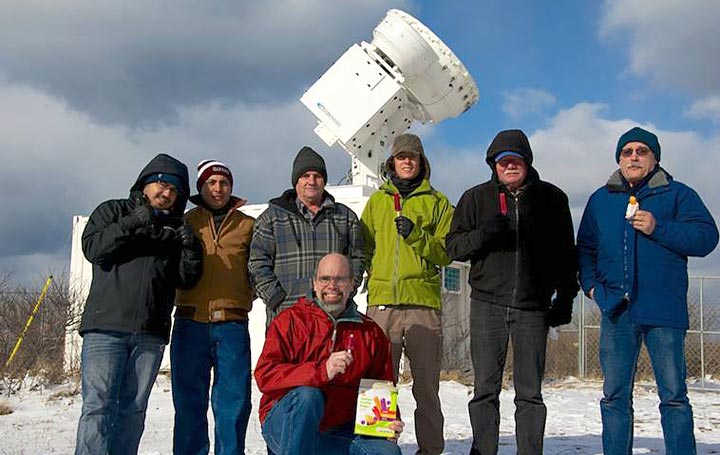 As final instrument calibrations and repairs were completed, Springston deemed MAOS ready to begin collecting data—and celebrated by treating his team to ice pops, a humorous nod to their mid-winter week on the Atlantic coast.

"The ice pops were frozen, but the fish at dinner was the freshest we could ask for," Springston said.

Each mobile observatory is a twenty-foot SeaTainer shipping container and a sheltered stand-alone lab capable of taking measurements within hours of set-up. Over two approximately six-week periods in the past year, the sampling stations have been gathering data to improve how aerosols—tiny particulates in the atmosphere—are represented in climate models. During the study, four standard weather balloons are launched each day to collect data on conditions such as wind speed and direction, pressure, and humidity, while MAOS collects data on aerosol properties, including their concentration, size distributions, and ability to scatter and absorb light. Scientists are also monitoring how changes in the atmosphere—whether there is any change in atmospheric radiation, for example—affect the properties of aerosols. A more robust knowledge of atmospheric aerosols may lead to deeper understanding of global climate change.

This deployment is part of the Two-Column Aerosol Project (TCAP), a research effort to understand how aerosols affect the atmosphere. Cape Cod was selected as the ideal project site because it offers geographical isolation but proximity to a major city. Scientists monitor airflow as it travels south over metropolitan Massachusetts and then east to the ocean. The Cape is also ideal for the project's "two-column" setup, which focuses sampling on two vertical columns of air. One column is located directly above the ground-based site, and another is about 155 miles off the coast.

To access this more remote air column, scientists fly sampling missions in a Gulfstream turbo prop. The aircraft is equipped with external probes as well as internal sampling devices that collect information about aerosol, soot, and cloud particles. This complementary data will be combined with measurements taken from the mobile labs on the ground.  The ground site provides continuous, long-term measurements at a single location while the aircraft provides vertical and horizontal context.

By studying aerosol particles using this "two-column" technique, atmospheric scientists have the opportunity to compare aerosols and their behaviors under a variety of atmospheric conditions: clean or polluted, clear or cloudy.

Scientists are still struggling to understand the many ways aerosols interact with and influence the formation of clouds. Research suggests that there is a relationship between aerosol concentration and cloud formation, and that changes in cloud density can result in increased temperatures at Earth's surface. Measurements obtained from the MAOS and research aircraft during TCAP will enable Springston and his team to better simulate, and thus better understand, these complex and often miniscule atmospheric deviations.

During the MAOS setup at the Cape Cod site, Springston was accompanied by two Brazilian colleagues, Glauber Cirino of Instituto Nacional de Pesquisas da Amazônia and Vinicius Machado of Universidade do Estado do Amazonas. These scientists were learning how to deploy the MAOS system in preparation for a study using both mobile units near Manaus, Brazil, in 2014 (GoAmazon2014). Using data collected there, scientists will study how aerosol and cloud life cycles are influenced by pollutants emitted from the factories and power plants of a tropical megacity.

"Working with scientists from other countries is a unique experience," Springston said.  "Finding common words for specialized tools, instruments and techniques required patience and understanding.  The Brazilians had never seen snow before.  On the other hand, in 2014 when MAOS visits the Amazon region, the North Americans will experience heat and humidity they've seldom encountered.

"This next program is a contrast with the Cape Cod study," Springston continued.  "Instead of seeing relatively heavy burdens of anthropogenic material as it is processed, the 'green ocean' of Amazonia is dominated by biogenic emissions virtually unburdened by man."

As the effects of climate change spread across the globe, an understanding of aerosols will equip scientists with precise information about the atmosphere that can help them create more accurate climate models.

MAOS is funded primarily by the DOE Office of Science. Additional funding was provided by the 2010 American Recovery and Reinvestment Act.