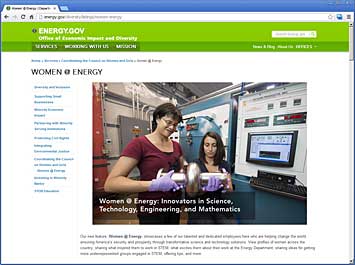 To date, seven scientists at Brookhaven Lab have been featured in the U.S. Department of Energy's "Women @ Energy" series.

At national laboratories, Women's History Month has been a time to celebrate women's past scientific accomplishments and also to encourage women to pursue opportunities in science, technology, engineering, and math (STEM) fields.

Earlier in March, the U.S. Department of Energy (DOE) launched a new series, "Women @ Energy," to highlight women who are improving the world through their careers in STEM across the DOE complex. To date, seven Brookhaven scientists have been featured. Read about them, their work, and their ideas to engage more women, girls, and other underrepresented groups in STEM here:

Here on site, Brookhaven Women in Science (BWIS) hosted an event each week in honor of Women's History Month, some organized with help from the Diversity Office and the Peconic Bay chapter of Zonta International. In you missed the talk "Exploring the Extreme Universe: Results from the VERITAS Gamma-ray Observatory" by Reshmi Mukherjee, professor of physics and astronomy at Barnard College, Columbia University, it's available on WBNL.