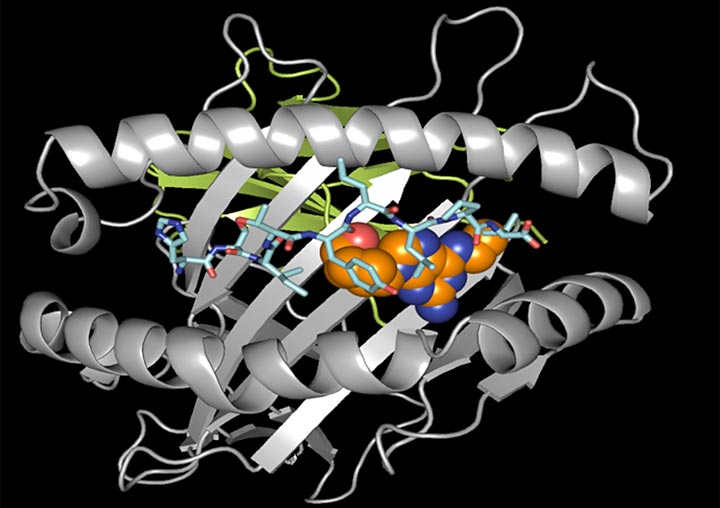 In this "ribbon diagram," the HIV/AIDS drug abacavir (orange, blue and red spheres) interacts with a protein (grey) made by a particular gene that causes a hypersensitivity to the drug. The protein "shows" the body's immune system a peptide (light blue) it has never seen, causing an allergic reaction.

From a patient's point of view, one of the unsettling things about taking a new drug is the possibility of unwelcome side effects or worse, dangerous allergic reactions. As drugs are being developed and then enter clinical trials, these issues play a huge role in the process, increasing costs and sometimes determining whether a drug will get to market at all.

One type of severe reaction is "hypersensitivity," in which the immune system over-reacts to a substance that is foreign but not infectious, producing symptoms that can be mild (such as rashes) to severe (organ failure, even death). In this study, researchers studied an antiviral drug known to cause hypersensitivity in patients who carry a particular gene. Using x-rays at Brookhaven Lab's National Synchrotron Light Source (NSLS), they were able to "see" how at the molecular level, the drug binds to the protein created from the gene, triggering the immune response. Their work has produced new ways to predict whether a drug is likely to induce a gene-based allergic reaction.

The drug they studied is abacavir, an antiviral used to treat HIV and AIDS. About eight percent of patients who take it experience hypersensitivity; out of these patients, the majority carry a particular gene known as HLA-B*57:01. It is a member of the "human leukocyte antigen" (HLA) gene family, which contains a large number of genes involved in the body's immune response.

"Many drug hypersensitivity reactions are HLA-linked, meaning that they will occur much more often or even exclusively in individuals who have certain variants of the HLA gene," said the study's lead scientist, Bjoern Peters from the La Jolla Institute for Allergy & Immunology in San Diego, CA. "The present system of clinical trials is very powerful in identifying side effects that occur in many people. However, HLA-linked hypersensitivity has been a really big problem that often doesn't surface until after the drug is approved and taken by thousands of people."

Scientists have proposed a few mechanisms by which abacavir may bind to HLA-B*57:01, but until this study none had been proven experimentally. Peters and his group favored the idea that abacavir can bind within the HLA-B*57:01 "peptide binding groove," a cleft on the gene in which other molecules can dock. This would interrupt the usual activity that occurs at the site, namely binding to certain peptides (short protein-like chains) and presenting them to T-cells, a type of white blood cell that is a key part of the immune system. Binding to abacavir, therefore, would alter how the gene communicates with receptors on the T-cell surfaces.

To verify this, Peters and his group first confirmed abacavir's tendency to bind to the protein generated from this gene (versus other genes in the HLA family) via a series of tests. They then approached a collaborator, David Ostrov from the University of Florida, to help grow crystals (a crystal is a repeating pattern of the same molecular unit) that consist of HLA-B*57:01 bound to a certain peptide (they call it pep-V) in the presence of abacavir. That particular peptide was chosen to maximize the chance of getting a good look at how abacavir is bound.

Ostrov then sent his crystals to Jean Jakoncic at the National Institutes of Health's National Institute of General Medical Sciences East Coast Structural Biology Facility, located at NSLS. At beamline X6A, the group used a technique called x-ray crystallography to "solve" the molecular structure of the abacavir/peptide/HLA-B*57:01 complex. X-rays aimed at the crystal produced an intricate diffraction pattern, from which the researchers could work backward and deduce what the complex looked like.

They represent the structure using a figure known as a ribbon diagram.

They discovered that abacavir binds to a certain pocket within the binding groove and, in the process, forms weak bonds to both pep-V and HLA-B*57:01. Further tests confirmed that the presence of abacavir does cause the gene to present a different set of peptides to the T-cell receptors.

Peters and his team have established assays (tests) that can be applied to test drug compounds to determine if a specific HLA variant reaction occurs. "You wouldn't have to wait until after the drug is introduced and thousands of people are potentially affected," he said, explaining the testing could be done in human blood samples. "This type of testing could be done before human subjects are exposed to the drug, and could lead to the design of drug types that do not have this effect, or – if this is not possible – to ensure that only individuals who do not have this HLA variant are given the drug, as is now done for abacavir."