"The Hard X-ray Nanoprobe at NSLS-II: A Big Microscope to Tackle Challenges at the Nanoscale" 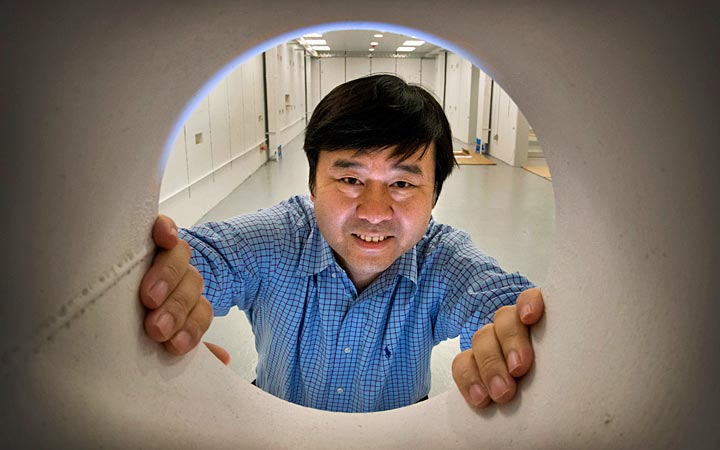 Brookhaven physicist Yong Chu at the National Synchrotron Light Source II looks through the port for the Hard X-Ray Nanoprobe (HXN) beamline that will be used to see structure and chemistry deep inside natural and engineered materials.

A worldwide race is on for scientists to develop ever more powerful x-ray microscopes. With ultra-high resolution x-ray optics at ultra-bright synchrotrons—such as the 120-meter-long Hard X-Ray Nanoprobe (HXN) being developed for the National Synchrotron Light Source II (NSLS-II) at Brookhaven Lab—researchers will see structure and chemistry deep inside natural and engineered materials as they address some of the biggest questions in materials science, physics, chemistry, environmental sciences and biology. Unprecedented capabilities, however, bring critical technical challenges, but scientists at Brookhaven Lab are on the job.

On Wednesday, April 17, join Yong Chu of the Photon Sciences Directorate for the 486th Brookhaven Lecture, titled "The Hard X-ray Nanoprobe at NSLS-II: A Big Microscope to Tackle Challenges at the Nanoscale." All are invited to attend this free talk, which is open to the public and will be held in Berkner Hall at 4 p.m. Refreshments will be offered before and after the lecture. Visitors to the Lab 16 and older must carry a photo ID while on site.

To join Chu for dinner at a restaurant off site after the talk, contact Jean Smiles (Ext. 4696).

During the talk, Chu will illustrate unique challenges and innovative approaches for x-ray microscopy at the nanoscale—measured in billionths of a meter. He will also discuss measurement capabilities for the first science experiments at NSLS-II.

Chu earned a Ph.D. in physics at the University of Illinois at Urbana-Champaign in 1997. He was a postdoc at Argonne National Laboratory in the Material Science Division from 1997 until 1999 and then at the Advanced Photon Source (APS) from 1999 to 2000. In 2000, he became an assistant physicist at the APS and was promoted to physicist there in 2005. He joined the Photon Sciences Directorate at Brookhaven Lab as group leader for the HXN beamline at NSLS-II in 2009.