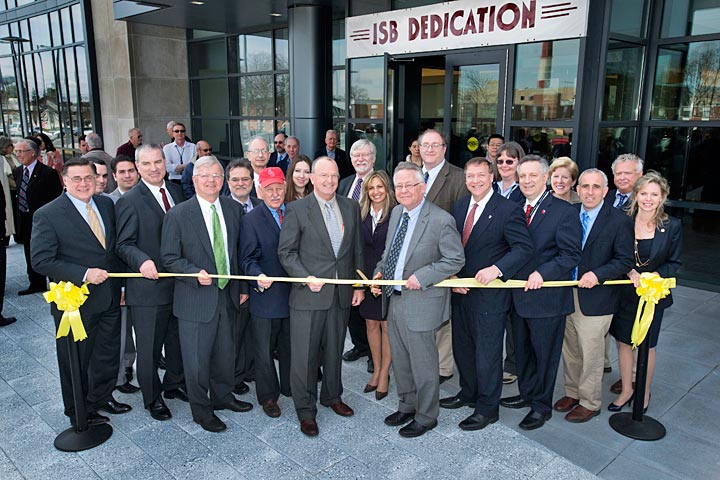 More than 150 people—including representatives of the U.S. Department of Energy (DOE) and Brookhaven Science Associates, elected officials, and members of the Brookhaven Lab community—gathered in the lobby of the new, world-class Interdisciplinary Science Building for energy research during a dedication ceremony held on April 11.

Multidisciplinary research teams will work together at the ISB to tackle America's most pressing energy challenges. Specifically, scientists will engineer and optimize materials with the goal of developing breakthrough technologies for batteries, biofuels, and solar panels. The ISB contains 87,700 square feet of office space, 60 standard laboratories, and four specialty labs: a humidity-controlled dry room and two ultra-low vibration laboratories connected via a vacuum-locked system to a laboratory customized for a process called molecular beam epitaxy.

"It's a building in which basic scientists as well as folks focusing on applications all across the board can meet together and work on a common goal," said Brookhaven Lab Director and master of ceremonies Doon Gibbs.

"We hope these interactions are going to spark unexpected, game-changing discoveries that will emerge through collaboration, conversation, and sharing our expertise—not just in house but reaching out to the larger community, to industry, to universities, to other national labs, and more broadly," Gibbs added, as he also noted the ISB's close proximity to the Center for Functional Nanomaterials, National Synchrotron Light Source (NSLS), and NSLS-II.

Gibbs then told the audience that he was extremely proud of everyone who contributed to the total 244,000 hours worked to build the facility without sustaining any lost time injuries.

The new ISB at Brookhaven Lab contains four specialty laboratories, where researchers with different scientific specialties will team up to take on significant energy challenges: a humidity-controlled dry room, where researchers can safely assemble and test new lithium-ion batteries; two ultra-low vibration laboratories housing the new Spectroscopic Imaging Scanning Tunneling Microscope (SI-STM) used to explore materials' electronic structure at the atomic scale; and the OASIS laboratory, which connects a lab customized for molecular beam epitaxy (MBE), a process researchers use to fabricate new materials one atomic layer at a time, with one of the ultra-low vibration labs via a vacuum-locked system. This system allows scientists to transport MBE-created samples directly to the SI-STM microscope without exposing them to air, which can diminish sought-after properties.

"Congratulations to the many Laboratory and department professionals who envisioned the need for this facility and made certain that it was delivered on time, on budget and safely. This is a job well done," Crescenzo said.

"What we have in this building today is really a symbol of Brookhaven's future and its ongoing commitment to innovations and breakthroughs in science," Stanley said. "The ISB is going to be a center. It's going to host research that addresses long-range problems, but also immediate needs for the country in areas like energy."

Stanley also noted the strong ties between Brookhaven Lab and SBU and the economic importance of their endeavors, as he said that Long Island can become a center for energy research, renewable energy research and green energy.

New York State Senator Kenneth P. LaValle then took to the stage and told the audience, "The synergy and the collaboration and cooperation between BNL and Stony Brook is key—just think of the nucleus of research that we have. You represent what's great about Long Island." (video)

Next, Laboratory Director Gibbs returned to the stage to read remarks from Bill Brinkman, outgoing director of the DOE Office of Science, who was unable to attend the ceremony. (video)

"The building we are dedicating today represents a new enhancement to the future of science. It will house scientists from several disciplines to work on interdisciplinary projects that may change the world," Brinkman wrote. "Whether it is high vacuum MBE technologies, ultra-high-resolution electron microscopy, or nanoscience technology investigating the nature of superconductors, storage batteries, or neurobiology it will be of the high standards that Brookhaven represents.

"Efficient and carbon free use of energy is surely a great challenge to the science and technology community," Brinkman continued. "The laboratories have the opportunity to make a difference and this new facility will certainly make this happen here at Brookhaven."

Associate Director of the Office of Safety, Security, and Infrastructure for the DOE Office of Science Marcus Jones spoke next. While offering his congratulations to everyone involved in building the ISB, Jones discussed how the science and discoveries made at the ISB will likely yield unexpected results that can be developed into technologies that will benefit future generations. (video)

"I do really appreciate all the work that you all do here, I am very proud of this building," Jones said.