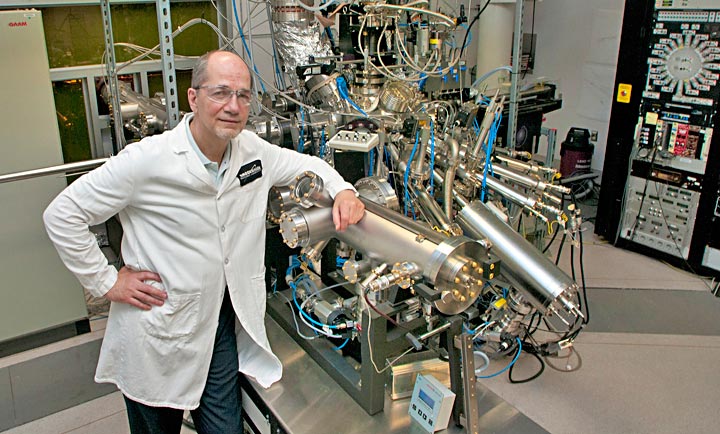 The answers to some of the greatest puzzles in science are hidden in the thinnest surfaces imaginable. Scientists hope that long-sought technology goals such as room-temperature superconductivity may one day be achieved through explorations of two-dimensional structures produced in the world's most advanced laboratories. The global quest to unravel poorly understood quantum-scale interactions in these materials could produce unprecedented technological breakthroughs.

In recognition of his leading role in advancing condensed matter physics, Ivan Božović of the U.S. Department of Energy's Brookhaven National Laboratory was selected to give the 2013 Max Planck Lecture on May 8 at the Max Planck Institute for Solid State Research in Stuttgart, Germany. The prestigious honor was accompanied by a gold medal and an opportunity to present a personal perspective on the field's status and prospects to an audience of prominent scientists.

"These phenomena occur at the far horizon of physics, and experimental techniques are advancing fast to probe this two-dimensional world."

"It was a great honor and a great responsibility to follow in the steps of those scientific luminaries invited to give this lecture in previous years," Božović said. "It was also an opportunity for reflection and synthesis. I believe that we are on the cusp of yet another revolution in physics built on the brilliant work of my peers over the past decade, and it was my privilege to suggest that we are witnessing the birth of an exciting new field of science, which I dubbed 'Interface Physics.' It can be defined by a distinct set of novel problems, techniques, phenomena, and theoretical concepts, which I have tried to identify and elucidate."

Interface physics deals with the interactions between electrons and atoms, and the states of matter that emerge in the thin layers of heterostructures, where two different materials join together. The discoveries scientists are making in interface physics could lay the foundation for breakthroughs in consumer electronics, national security, and many other fields.

In Božović's lecture at the Max Planck Institute—one of the leading condensed matter physics center in Europe—he outlined some of the phenomena explored at the frontier of interface physics:

"These phenomena occur at the far horizon of physics, and experimental techniques are advancing fast to probe this two-dimensional world," Božović said.

The laboratories in Brookhaven Lab's new Interdisciplinary Science Building (ISB) will further advance the research of Božović and his colleagues. The ISB houses an innovative MBE laboratory where the synthesis of atomically perfect 2D materials will be uniquely linked to state-of-the-art surface-analysis techniques, making new collaborations possible.

Bozovic earned a Ph.D. in physics from the University of Belgrade in Yugoslavia in 1975. He remained there until 1985 and served as a professor and the head of the Physics Department. From 1986 until 1988, he worked at the Applied Physics Department at Stanford University. He was a senior research scientist at Varian Research Center in Palo Alto, California, from 1989 to 1998, and the chief technical officer and principal scientist for Oxxel GmbH in Germany from 1998 to 2002. He joined Brookhaven as a senior scientist and the leader of the Molecular Beam Epitaxy group in 2003.