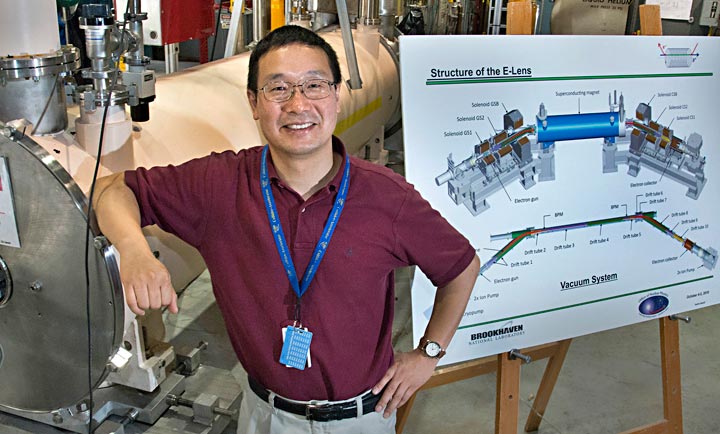 Yun Luo of the Collider-Accelerator Department, who helped develop the new electron-lens system to increase the rate of collisions, or luminosity, at the Relativistic Heavy Ion Collider

Scientists at Brookhaven Lab’s Relativistic Heavy Ion Collider (RHIC) smash atomic particles together to understand more about why the physical world works the way it does. Increasing rates of particle collisions, or luminosity, at RHIC is no small challenge, but the results—more data for better clues—are crucial for scientists trying answer big questions about the origins of matter and mass.

When scientists at RHIC collide protons, they don’t hope for a head-on crash by focusing only two particles roaring toward each other from opposite directions. For all intents and purposes, that would be impossible. The scientists can smash protons because they significantly increase the likelihood of collisions by steering hundreds of billions clumped into bunches, which at RHIC are about 3.5 meters long and less than 1 millimeter tall. The particles of these bunches are all positively charged, so when they interact, they repel outwardly—think how magnets repel when their same poles are pushed together. Although this decreases the density of each bunch, reducing luminosity, scientists in Brookhaven Lab’s Collider-Accelerator Department (C-AD) have a solution.

After more than seven years of development, the scientists have designed an electron-lens system that uses electrons’ negative charges to attract positively charged proton bunches and minimize their repelling tendencies. Combined with other upgrades to the RHIC accelerator complex, these lenses are important components in efforts towards the major task of doubling the luminosity for proton-proton collisions.

On Wednesday, July 17, join Yun Luo of C-AD for the 488th Brookhaven Lecture, titled “Magic Lenses for RHIC: Compensating Beam-Beam Interaction.” All are invited to attend this free talk, which is open to the public and will be held in Berkner Hall at 4 p.m. Refreshments will be offered before and after the lecture. Visitors to the Lab 16 and older must carry a photo ID while on site. Add to calendar

To join Luo for dinner at a restaurant off site after the talk, contact Anna Petway (Ext. 4776).

During this lecture, Luo will start by discussing some collider fundamentals and the challenges of increasing luminosity. He will then introduce the electron lens system he helped develop at Brookhaven as he explains how this tool could help double the luminosity at RHIC and prepare the machine for physicists’ future endeavors.

Luo earned a Ph.D. in physics from the Institute of High Energy Physics at the Chinese Academy of Science in 2000. He was a research associate in the Accelerator Physics Group at the European Nuclear Research Facility (CERN) in Switzerland from 2000 until 2002 to help design the Large Hadron Collider—which may also benefit from the new electron lens system. Luo returned to the Institute of High Energy Physics from 2002 to 2003. In 2003, he arrived at Brookhaven Lab’s Collider-Accelerator Department as a research associate. He rose through the ranks and in 2009, was made physicist in the Stochastic Cooling and Electron Lens Group.