The vast empty cavern that once surrounded the storage ring of Brookhaven’s newest light source is no more. At the National Synchrotron Light Source II (NSLS-II), beamlines now jut out from the hutches that line the outer edge of the storage ring, crossing and starting to fill space on the experimental floor. With them comes the anticipation of starting up the new machine.

“I’ve been waiting to see this since I came to Brookhaven,” said Stuart Wilkins, group leader at the coherent soft x-ray scattering beamline (CSX-1). “It’s been seven years since I arrived, and I came here to get to next year, when they open that shutter and we get the first beam.”

The birth of a beamline 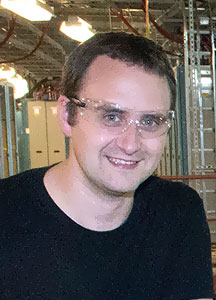 Wilkins is a physicist in the Condensed Matter Physics and Materials Science Department, but has served as a group leader for NSLS-II for the past year. “Here, the technicians and engineers and scientists all cross paths, and we have to understand each others’ work to get this project completed,” he said. “It’s crucial that we blur those lines a bit.”

Everyone who has worked on the beamline – from riggers to plumbers to electricians to vacuum technicians – played a key role in bringing this precision beamline to life, Wilkins said. “We’ve done all of this to get to the science,” which will begin in 2014 as the beam starts circulating for calibration studies that will prepare the facility for scientific use.

It hasn’t been an easy road. “When we first began building the beamline, we had some bumps along the way,” he said. For a time, the beamline had no connection to the internet, which meant someone had to be physically present to check diagnostics and take notes with pen on paper. “It was like science from the 60s over here.”

Now, the beamline can “talk to the outside world,” which allows technicians to monitor progress remotely. The team has already installed the vacuum pumping and beam diagnostic vessels, and has received the first mirror system from Toyama in Japan.

The next step is to start the process of performing the vacuum bakeout of all the pumping and diagnostics sections – a process that uses heat to ensure all elements are clean and ready for beam.  They will soon start the task of cabling up the gauges and diagnostic elements of the beamline. The coherent soft x-ray beamline has over 800 individual signal cables ranging from vacuum gauges and motor connections to ethernet connections.

When the beamline is finished the coherent flux at NSLS-II will be over 10,000 times that of the NSLS. This increase in flux does not just change the speed of experiments but also changes the type of experiments that can be performed. A key area of study at CSX-1 will be the measurement of electronic textures in strongly correlated materials, for example high temperature superconductors.

On the opposite side of the ring, another beamline is on its way to completion. The Hard X-Ray Nanoprobe beamline and endstation instruments (HXN) are designed to explore new frontiers of hard x-ray microscopy. This will allow them to discern structures at ever-smaller spatial scales, with the possibility of reaching even smaller than a billionth of a meter.

“We’re working to get resolution that’s never been achieved before,” said Yong Chu, the group leader for HXN.

At HXN, the first optical enclosure is “about 80 percent complete” and the monochrometer – which will select the ideal x-ray wavelengths for imaging a particular sample – is coming soon.

When you’re attempting to achieve nanometer resolution, all the optics must be pristine, said Chu. He and his team are aiming to create a beamline with sub-nanometer resolution. The HXN beamline extends past the experimental floor into a separate building unattached to the NSLS-II ring and outfitted with stabilizers to minimize vibrations that could blur images.

“This is a unique project,” Chu said. “Any time a new capability is added to a world-leading facility like this, it leads to new discoveries.”

At HXN, users will be able to probe the structures of complex materials such as nanocrystals, catalytic materials, and energy-storage materials.

Beam will start circulating for commissioning the complex machinery of NSLS-II in the coming year, and the facility will be open for science in 2015.