One for the Records: Recovery from NSLS Vacuum Leak 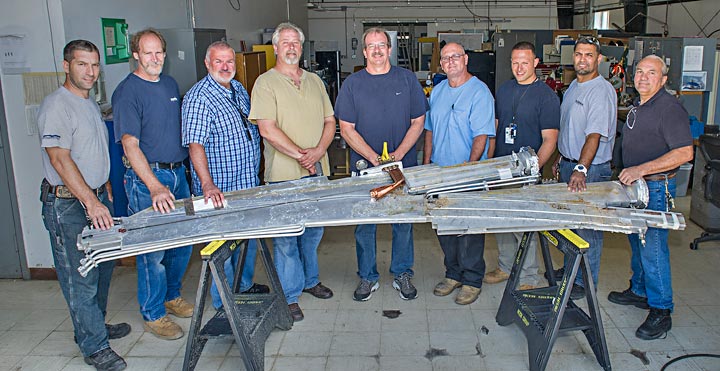 Among those responsible for the quick recovery from the recent NSLS X-Ray Ring vacuum leak are (from left) Steven Farrugia, Brian Walsh, Bob Scheuerer, Rodger Hubbard, Pete DeToll, Mike Schwarz, Nick Risi, Pedro Rivera and Walter DeBoer. In front of the group is the failed section of vacuum pipe with the extracted copper absorber lying on top.

“The news is bad.” That’s how Photon Sciences Accelerator Operations Group Leader Emil Zitvogel started an email to key individuals, alerting them to a vacuum leak that occurred in the NSLS X-Ray Ring on Saturday, June 15.

In official parlance, here’s what happened: A water-cooled component internal to the vacuum pipe at beamline X25 failed, resulting in a water-to-vacuum leak that interrupted scheduled operations. The Vacuum-Ultraviolet Ring was not affected and continued delivering beam to users.

As Zitvogel explained, in regular operations, a block of copper mounted to a flange and welded to the vacuum chamber absorbs heat from the X25 undulator. Normally, the heat absorbed by the copper block is removed by copper water lines that are brazed to the copper block. One of these water lines developed a leak that allowed water into the vacuum chamber, resulting in the “bad news.”

Over the following two weeks, a technical team assembled and managed by Bob Scheuerer and Walter DeBoer and reporting to Zitvogel and his deputy, Roy D’Alsace, sawed out the faulty section of the ring, found a replacement part, tested it, maneuvered it into the tunnel without disturbing the positions of the magnets lined up just so around the accelerator ring, and welded the new piece into position. After a week of beam conditioning, the X-Ray Ring was put back into service for users on July 8.

As Photon Sciences Users’ Executive Committee Chair Bruce Ravel said, “It is hard to overstate how amazing that repair job was!” He described the recovery effort as “extraordinary” and called it a testimony to the excellence of the technical staff and a demonstration of “the continuing value placed on operations at NSLS.”

Because of this lost time, the originally planned maintenance period in September has been considerably shortened in order to return valuable beam time back to NSLS users.

These individuals are credited with the successful repair: