In the final days of July, a small group gathered outside the National Synchrotron Light Source II to break ground on a satellite building that will house the end station for one of the new facility’s state-of-the-art beamlines. The Soft Inelastic X-ray Scattering (SIX) beamline will allow scientists from around the world to simultaneously study the electronic and magnetic properties of matter through spectroscopy and X-ray scattering. And it will do this better than any other resonant inelastic X-ray scattering (RIXS) instrument to come before it.

“It’s an exciting beamline, and we’re looking forward to the science that will come from it.”

“What will make SIX the best RIXS instrument in the world is a combination of two best-in-class features,” said Ignace Jarrige, the group leader for the SIX beamline, who worked closely with the user community to define the scientific mission and technical capabilities of the beamline. “The energy resolving power will be 100,000 and the continuous rotation of the spectrometer arm about the sample will be over a 120-degree range. These two world-leading features drive the size of the instrument, and therefore of the satellite building.” 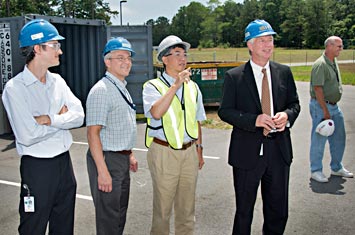 Ignace Jarrige, Qun Shen, Steve Hulbert, and Steve Dierker talk excitedly as they point out where the SIX satellite building will eventually stand.

To achieve such high energy resolving power, the beamline must be 105 meters long, which means it will extend outside of the main building at NSLS-II and into its own satellite building.

“It’s not only the length, which would be impossible within the NSLS-II experimental hall, that necessitated the building,” Jarrige said. “ The rotation of the 15-meter-long spectrometer arm over 120 degrees requires a large building footprint.”

The building will have a roof height of 22 feet to allow for clearance as the spectrometer arm swings around and will be approximately 9000 square feet, including the experimental area and the control, electrical, and mechanical rooms. 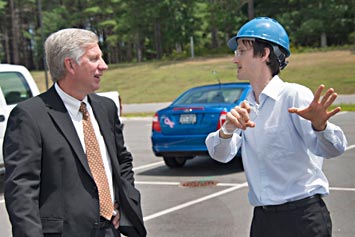 Ignace Jarrige explains the work that will be done at the SIX beamline to Associate Laboratory Director for Photon Sciences and NSLS-II Project Director Steve Dierker.

The SIX beamline will be well-suited for condensed matter physics, where the most fascinating phenomena often involve low energy scales. “At SIX, RIXS measurements with a 10-milli-electron-volt resolution will be possible for the first time,” said Jarrige, “providing direct access to the energy scales relevant to such phenomena, and enabling studies of the charge, spin, and orbital properties of the electrons with the same instrument.”

Steve Dierker, the Associate Laboratory Director for Photon Sciences and the NSLS-II Project Director, said, “It’s an exciting beamline, and we’re looking forward to the science that will come from it.”

“We’ll make good use of it,” Jarrige said. “With its outstanding capabilities, SIX will provide a powerful and elegant way to fill some of the basic research needs of the Department of Energy in scientifically challenging areas like superconductivity, energy storage, solar energy, and catalysis.”

The construction of the satellite building for the SIX beamline at NSLS-II is schedule to be completed by May 2014.