For Better Li-ion Batteries, Scientists Watch One at Work

Using x-rays at the National Synchrotron Light Source (NSLS), a group of researchers has studied, in great detail, the nanoscale workings of a lithium-ion battery, learning new information about the chemical reactions and structural changes that take place inside the cell. Their work will help guide future designs of better-performing, lithium-ion batteries, which are widely used to power consumer electronics. 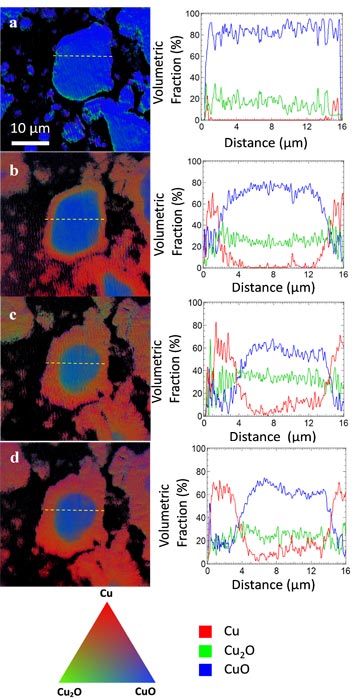 Lithium-ion batteries work by shuttling lithium ions back and forth between the battery's two electrodes, the anode and cathode, through a liquid electrolyte in between. The battery discharges as the ions are gradually extracted from the anode and inserted into the cathode, causing a reaction that produces electrons. As the battery charges via an external power source, like an electrical outlet, the ions move the other way.

Brookhaven Lab scientists Jiajun Wang, Yu-chen Karen Chen-Wiegart and Jun Wang used a newly developed x-ray technique, transmission x-ray microscopy (TXM), to study a lithium-ion battery anode during multiple charge-discharge cycles. Combined with a more conventional technique, x-ray absorption near edge spectroscopy (XANES), which provides averaged information, TXM is able to illuminate not only the morphological changes of the electrode but also the chemical reactions that take place as the battery is cycled, including data on the spatial distribution of the reactions. In this work, TXM allowed the group to achieve a resolution of less than 30 billionths of a meter (nanometers).

This study is also a good example of the usefulness of hard x-rays, such as those used in TXM, in energy research. “Hard” x-rays, which have energies on the more powerful end of the x-ray spectrum (weaker x-rays are called “soft”), are naturally suited for these kinds of studies. They are non-destructive to samples, sensitive to the elemental makeup of samples, and pose virtually zero risk to the environment. In the case of battery research, hard x-ray beams are particularly good tools because they can penetrate the battery and reveal information about how it works at the nanoscale.

In short, “TXM can more truly reveal the behavior inside a real battery system,” said Jun Wang, who led the study.

At NSLS beamline X8C, Wang and her team combined TXM with XANES to study a lithium-ion battery with an anode made of copper oxide (CuO). The CuO was in the form of tiny particles (some greater than five micrometers (millionths of a meter) in size), which is widely used in real batteries and is a typical anode material. They created a battery cell very similar to the coin-shaped batteries people are most familiar with, except they modified it to allow for better x-ray data collection. These changes include adding two polymer-film windows to the cell to better track the chemical reactions and replacing conventional metal foil with carbon paper as the electrode support to allow better x-ray penetration.

The group took a series of x-ray scans during the entire electrochemical conversion process of the CuO. They discovered that during the first cycle, the anode heartily accepted the ions (lithiation) but that the reverse process, delithiation, was not as robust, particularly compared to CuO that takes the form of nanoparticles, which are significantly smaller than the particles used in this work.

By comparing their x-ray data to established x-ray spectra for Cu, CuO, and Cu2O, the group was able to determine information on the changing chemical phase of the anode. The chemical mapping of the chemical phases and the percentage of the chemical compositions during the charge and discharge cycles were presented, which is critical to better understanding the chemical reactions that occurred. They also collected electrochemical data using a technique called cyclic voltammetry (CV), in which the electrode potential ramps linearly with time and current measurements are taken. The CV measurements are consistent with the TXM-XANES results.

The first cycle's poor delithiation behavior is partly due to volume expansion of the CuO particles that occurs during lithiation, which was confirmed by images taken with a camera detector. The images show that, during the first lithiation, the large-sized particles developed a core-shell structure, appearing as a gray shell surrounding a dark core, with an “interface phase” in between. As lithiation progressed, the images show that the shell became thicker. During delithiation, the particle volume only decreased slightly, indicating few lithium ions were extracted from these large particles. This visually confirms the poor reversibility revealed by the x-ray and CV data.

Images show that prior to the second cycle, cracks had appeared in the CuO particle shells, which exposed some of the inner, unreacted CuO material and allowed a second, although more limited, lithation reaction. This would explain why the shell gets thicker during the second lithiation reaction.

“The information we have uncovered will be key for further modeling, simulation and design of new electrode materials,” said Wang. “Additionally, our methodology can be widely used in a variety of energy science research.”

Their findings were published in the July 25, 2013, edition of Chemical Communications and featured on the inside cover of the journal. The work is supported by the Department of Energy.