By Lawrence Kleinman and Arthur Sedlacek 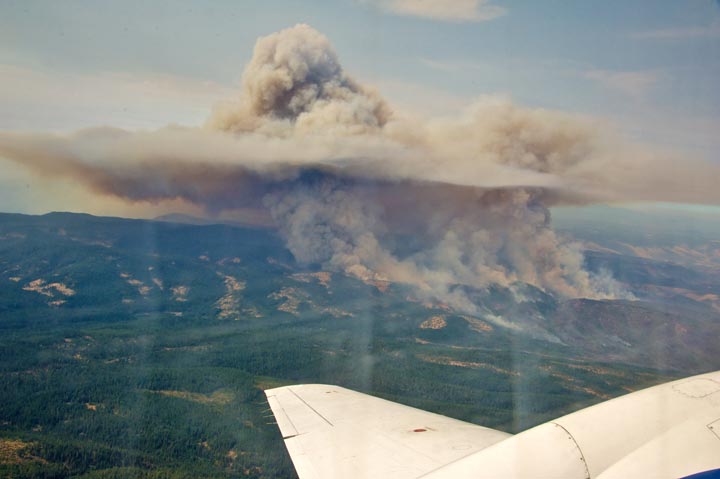 A massive wildfire plume over Washington State from the window of the Gulfstream-1, a DOE aircraft filled with a suite of cutting-edge instruments. The way small particles evolve inside that smoke offers crucial clues to understanding the role wildfires may play in climate change.

The massive wildfires that recently raged through the Northwest carved trails of tremendous destruction. The stories of these fires—from the devastation to homes and forests to the courageous work of men and women battling the blaze—largely played out across the ground. But wildfire fallout actually extends far into the skies and raises important questions about how smoke can impact climate.

To find the answers, we needed to fly state-of-the-art instruments directly into the eerie, orange glow of the multi-mile smoke plumes. As the threat of global warming becomes more and more pronounced—from rising sea levels to powerful storm systems—accurate and immediate measurements are more essential than ever.

"We flew back and forth across multi-mile plumes, tracking single sets of particles as shifting winds moved them through the sky. That variability is exactly why we need to be in the air with the instruments, making adjustments in real time."

Brookhaven Lab leads the Biomass Burn Observation Project (BBOP)—a close collaboration with Pacific Northwest National Lab and 12 other research groups. BBOP is dedicated to measuring the way airborne soot evolves during its first few crucial hours in the sky. The smoke impacts climate directly and indirectly: directly by reflecting and absorbing sunlight, and indirectly by influencing the formation of clouds.

Wildfires contribute about 40 percent of the black carbon in the atmosphere. Although impacts are felt in the U.S., most large-scale aerial studies of plume particles have been conducted in the Southern Hemisphere or Northern boreal regions, where fires are more predictable. Location matters in this science, not just because of weather patterns and smoke dispersal, but also because of the nature of the biomass itself—the trees and other objects consumed in the blaze. We just finished a series of 19 flights around Washington State from July to September, and the results offer a compelling portrait of these dense and complex formations.

We are the principal investigators on BBOP, but it’s a big collaboration with a lot of moving parts. Before the research even becomes possible, we work closely with a range of experts to guarantee everyone’s safety—after all, wildfires are volatile and unpredictable events. The science may be important to understanding climate, but the on-the-ground and in-the-air work of firefighters and other rescue workers takes absolute precedence.

First and foremost, our pilots observe the FAA’s Temporary Flight Restrictions and stayed out of the way of the smokejumpers, who parachute in to fight these fires. It’s only through their consideration that we’re allowed to do our work. And we cannot praise our pilots enough for their skill and willingness to embrace the challenge of translating scientific objectives into safe flight plans.

We flew back and forth across multi-mile plumes, tracking single sets of particles as shifting winds moved them through the sky. That variability is exactly why we need to be in the air with the instruments, making adjustments in real time. 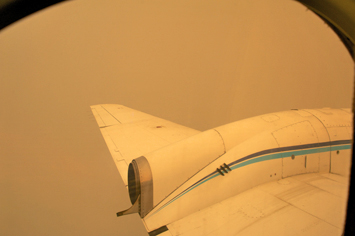 Inside the wildfire plumes where scientists measure aerosol changes, the smoke itself takes on an eerie, orange glow.

The smoke above these wildfires breaks down into two main components: aerosols and gases. BBOP focuses on aerosols—solid particles or liquid droplets in the air—measuring their size, optical properties, cloud condensation effects, and chemical composition. More than 30 instruments, many of them built at Brookhaven Lab or by collaborating researchers, collected about 100 gigabytes of data on each four-hour flight. Fires that we observed in Washington, Oregon, and Idaho burned hundreds of thousands of acres and injected many millions of tons of gases and aerosols into the atmosphere.

One of our new tools [developed by Sedlacek] measures light absorption through photo thermal spectroscopy. Each aerosol particle absorbs light, which it then radiates as heat. Everyone has seen that heat-haze mirage over a blacktop parking lot on a hot summer’s day—we’re looking at the same type of optical patterns to determine the light absorption or reflection of soot in the atmosphere.

Things get tricky on the plane, which is basically a giant, fast-moving, vibrating platform surrounded by air with rapidly changing temperature and pressure—this is a far cry from laboratory control. The steady rock and roll of the aircraft kept us on our toes, with the whole team making constant adjustments.

The thermal spectroscopy measurements look at 10-picometer changes in optical pathlength, and compensating for the motion of an aircraft is a unique challenge. The instrument itself is suspended on cable isolators—these are little springs that absorb as much vibration as possible. The interferometer design is also unique in that it can compensate for movement and remain internally calibrated.

Jian Wang, one of our collaborators in Brookhaven’s Environmental Sciences Department, designed another instrument to measure the size distribution of these aerosol particles. Size influences how the particles interact, their optical properties, and also their ability to attract condensation and form cloud droplets. Previous devices required a minute or two to take data, but Jian’s instrument needs just one second. The Gulf Stream 1 aircraft that we use travels 100 meters in one second, so we’re talking about drawing a map scaled to 100 meters versus 6,000—this is huge in terms of spatial resolution.

We also measure the chemical composition with a mass spectrometer and captured individual particles with a transmission electron microscopy (TEM) sampler for later atomic-scale analysis.

We measured the near-field evolution of these aerosols with great precision, and all the preliminary data confirms the significance of this window. The data analysis is underway, and the collaboration will be drawing conclusions for a long time. But we can already say with some certainty that the wildfire aerosols that we observed have a net cooling effect, meaning that they reflect more sunlight than they absorb.

The question of how this fits into larger models will need to be answered by climate scientists working with massive data sets. BBOP narrows the uncertainty and grants clarity to one major variable, and we will continue to push this air-sampling science. Our optical measurements already help corroborate and deepen the data pulled from NASA satellites, and we only expect that collaboration to grow.

We got back up in the air to measure aerosols from agricultural fires in the lower Mississippi River Valley—mainly in Arkansas, Mississippi, and Louisiana—starting on Oct. 1. These controlled fires produce smaller and much shorter-lived plumes, offering another set of challenges and opportunities, and we look forward to uncovering that additional piece of the puzzle.

The research is funded by the Atmospheric Radiation Measurement and Atmospheric System Research programs supported by the U.S. Department of Energy Office of Science.