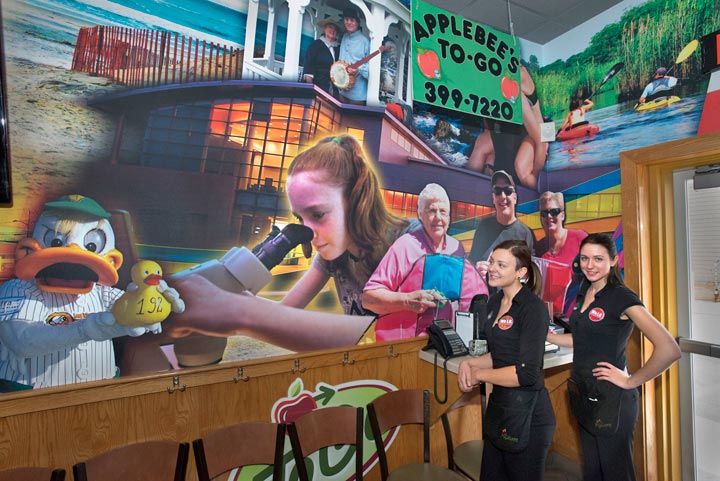 Q: What do salads, burgers, and Brookhaven Lab have in common?
A: All can be found at local Applebee’s! 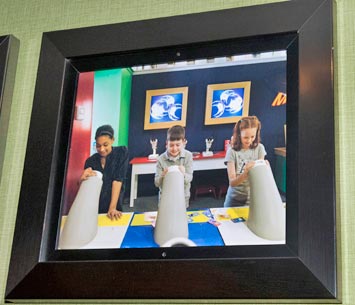 If you happen to visit the Applebee’s restaurant located just down the road from the Lab on Montauk Highway in Shirley, you might be pleasantly surprised to see a large mural on the back wall featuring a young girl peering through a microscope with an image of the Center for Functional Nanomaterials in the background.  That young girl (a daughter of a Lab employee), was a visitor to the Lab’s Science Learning Center (SLC) and part of a group of young students photographed for BNL’s Summer Sundays ad campaign in 2010. 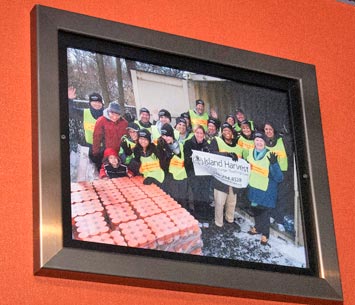 In addition to the large mural, two framed images from Brookhaven Lab hang amidst other community photos in the restaurant. One photo shows a group of Lab employees, who volunteered at a local soup kitchen after Super Storm Sandy, helping to unload supplies donated by Brookhaven Science Associates. The second photo shows three children at microscopes at the SLC.

“When I walked in to Applebee’s and saw the BNL photos I got a big smile on my face,” said Nora Detweiler, acting manager for the Lab’s Community Relations Office. “Seeing these photos featured in our neighborhood underscores our community outreach efforts and promotion of our science education programs.”