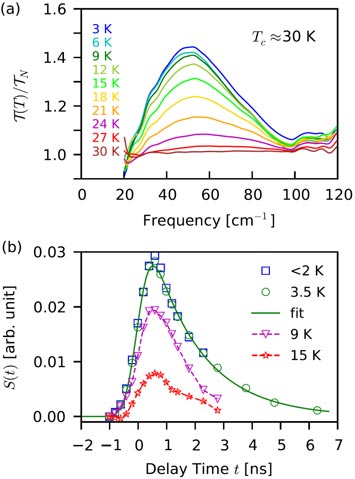 Superconductors are a fascinating group of materials in which electrons can flow with almost zero resistance. They have the potential to revolutionize electronics and power distribution, but no existing superconductors have an ideal combination of properties necessary to realize these applications. To design the ideal superconductor, scientists need a complete understanding of the complex, atomic-level electrical and magnetic behaviors that produce the phenomenon.

Many groups have focused their efforts on “high-temperature” (high-Tc) superconductors that operate at temperatures well above the conventional superconducting materials. Conventional superconductors must be chilled to almost absolute zero (the coldest temperature possible), making them impractical for many applications. The most widely studied high-Tc materials, known as cuprates because they contain layers of copper and oxygen atoms, avoid the ultra-low temperature requirement, but exhibit other properties that limit their practical use.

Recently, a new family of iron-based superconductors was discovered that do not seem to superconduct in the same way as conventional superconductors or quite like the cuprates. This iron-based family has been found to be quite large and diverse, so physicists are hoping that studying all of its members will yield a clear picture of how they operate, and point the way to a high-Tc material that has other necessary properties.

In this work, researchers from Brookhaven National Laboratory and the Leibniz Institute for Solid State Physics in Dresden, Germany, investigated an iron pnictide compound composed of lanthanum (La), iron (Fe), arsenic (As), oxygen (O), and an added fluorine (F) “dopant” that replaces about 10 percent of the O atoms. Abbreviated LaFeAsO1-xFx (the 'x' denotes the number of F and, therefore, O atoms per molecule), it was the first iron-based superconductor found to operate at temperatures higher than most conventional superconductors. Still, little is known about how it works.

This work may be a key step in changing that. Using beams of infrared light produced at Brookhaven's National Synchrotron Light Source, the group discovered evidence that LaFeAsO1-xFx has a full “superconducting gap” – the energy required for electrons in the lowest energy state, the ground state, to “jump” into higher energy levels. This gap is one hallmark of a superconductor and an indicator of its performance under certain conditions. For example, the gap in the cuprates actually disappears for electrons traveling in certain directions.

“Understanding the details of the gap is essential for unraveling the superconducting mechanism, yet questions about gap structure in this material have persisted even after years of research,” said Brookhaven researcher Xiaoxiang Xi, who was the lead experimenter in the study. “Establishing these details experimentally, as we have done, puts constraints on the possible theories that could explain the origin of the superconductivity in these materials.”

An important part of their work is the sample itself: a high-quality film just 300 nanometers (billionths of a meter) thick. Growing a LaFeAsO1-xFx single crystal, which would be optimal, is very difficult to do and is one reason why the material hasn’t been extensively studied. A thin polycrystalline film is a good substitute and is well suited to infrared experiments.

At NSLS beamline U4IR, the group studied the film using far-infrared light (which is closest to microwaves on the energy spectrum; near-infrared light is closest to visible light) as they increased the temperature of the sample from about 0 degrees Kelvin (absolute zero) to about 30K. The light passed through the sample and was collected by a spectrometer, which recorded the energies of the infrared photons as they emerged from the film. Only photons with certain frequencies are absorbed by the electrons; the resulting signal that exits the sample “carries” information about the superconducting pairing and the existence of a gap. Xi and his collaborators observed evidence consistent with what they’d expect to see if a full gap was present.

They found more definitive evidence of the gap using a special infrared technique made possible by another characteristic of the light produced at NSLS – namely, that it is not a continuous source but instead arrives in very short pulses, each less than one-billionth of a second in duration. These pulses can be used to take a snapshot of the superconductor's behavior, including the energy gap. For the measurement, the superconductor was excited by short pulses of laser light that weakened the gap, and then probed with the pulsed far-infrared from the synchrotron. This time-sensitive information revealed that the gap recovery was slow, just like what we see in the fully gapped low-Tc materials. An incomplete gap, such as in the cuprates, results in a relaxation time that is much faster.

“These two techniques converge to provide good evidence for a full superconducting gap in LaFeAsO1-xFx,” said Xi. “But we need more information to more fully describe the nature of it.”

This research is explained in the paper “Evidence of a full gap in LaFeAsO1−xFx thin films from infrared spectroscopy,” published in the May 31, 2013, online edition of Physical Review B. It was supported by the U.S. Department of Energy and the German Research Foundation