'The Shape and Flow of Heavy Ion Collisions' 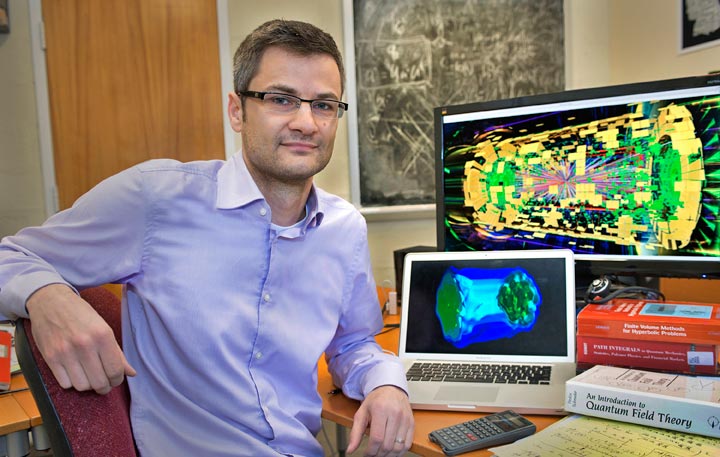 The sun can’t do it, but colossal machines like the Relativistic Heavy Ion Collider (RHIC) at Brookhaven Lab and Large Hadron Collider (LHC) in Europe sure can.

Quarks and gluons make up protons and neutrons found in the nucleus of every atom in the universe. At heavy ion colliders like RHIC and the LHC, scientists can create matter more than 100,000 times hotter than the center of the sun—so hot that protons and neutrons melt into a plasma of quarks and gluons. The particle collisions and emerging quark-gluon plasma hold keys to understanding how these fundamental particles interact with each other, which helps explain how everything is held together—from atomic nuclei to human beings to the biggest stars—how all matter has mass, and what the universe looked like microseconds after the Big Bang.

Björn Schenke of the Physics Department at Brookhaven Lab is one of the scientists focused on theoretical descriptions of heavy ion collisions and quark-gluon plasma. On Wednesday, Dec. 18, join him for the 490th Brookhaven Lecture, titled “The Shape and Flow of Heavy Ion Collisions.” All are invited to attend this free talk, which is open to the public and will be held in Berkner Hall at 4 p.m. Refreshments will be offered before and after the lecture. Visitors to the Lab 16 and older must carry a photo ID while on site. Add to calendar

To join Schenke for dinner at a restaurant off site after the talk, contact Marcy Chaloupka (Ext. 2524).

During this lecture, Schenke will discuss theory that details the shape and structure of heavy ion collisions. He will also explain how this theory and data from experiments at RHIC and the LHC are being used to determine properties of the quark-gluon plasma.

Schenke earned a master’s degree in 2004 and Ph.D. in 2008 in physics from Goethe University in Germany. He was a postdoctoral fellow at McGill University in Canada from 2008 to 2010 before arriving at Brookhaven Lab’s Physics Department in 2010. Continuing his research on heavy-ion collisions and quark-gluon plasma, Schenke was honored with a Goldhaber Distinguished Fellowship in 2012. This prestigious fellowship—funded by Brookhaven Science Associates, the company that manages Brookhaven Lab for the U.S. Department of Energy—is awarded to candidates with exceptional talent and credentials who have a strong desire for independent research at the frontiers of their fields.