This lecture was scheduled for Jan. 22, but was postponed because of inclement weather. It has been rescheduled for Thursday, Feb. 6, at 4 p.m. in Berkner Hall. 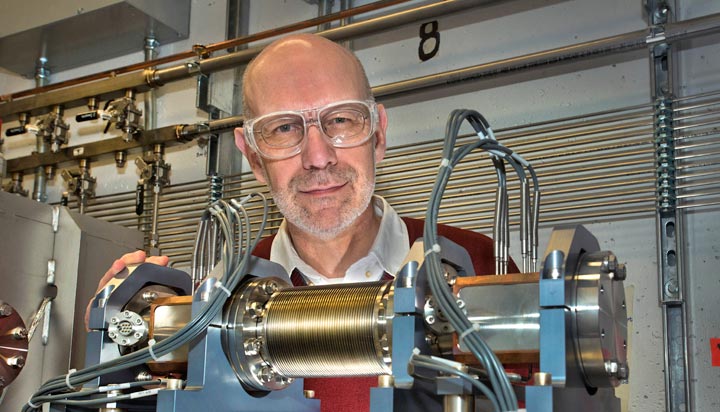 Juergen Thieme of Brookhaven Lab's Photon Sciences Department will give the 491st Brookhaven Lecture at 4 p.m. on Thursday, Feb. 6, in Berkner Hall

Time is money and for scientists who need to collect data at research facilities like Brookhaven Lab’s National Synchrotron Light Source (NSLS), “beamtime” can be a precious commodity. While scanning a complex material with a specific technique and standard equipment today would take days to complete, researchers preparing to use brighter x-rays and the new sub-micron-resolution x-ray spectroscopy (SRX) beamline at the National Synchrotron Light Source II (NSLS-II) could scan the same sample in greater detail with just a few hours of beamtime. Talk about savings and new opportunities for researchers!  Users will rely on these tools for locating trace elements in contaminated soils, developing processes for nanoparticles to deliver medical treatments, and much more.

Meet the Speaker After the Lecture

Join Thieme for dinner at a restaurant off site after the talk on Thursday, Feb. 6. RSVP by contacting Jean Smiles (Ext. 4696).

On Thursday, Feb. 6, join Juergen Thieme of the Photon Sciences Directorate for the 491st Brookhaven Lecture, titled “A Fast, Versatile Nanoprobe for Complex Materials: The Sub-micron Resolution X-ray Spectroscopy Beamline at NSLS-II.” All are invited to attend this free talk, which is open to the public and will be held in Berkner Hall at 4 p.m. Refreshments will be offered before and after the lecture. Visitors to the Lab 16 and older must carry a photo ID while on site. Add to calendar

To join Thieme for dinner at a restaurant off site after the talk, contact Jean Smiles (Ext. 4696).

During this lecture, Thieme will explain benefits for next-generation research with spectroscopy and more intense x-rays at NSLS-II. Specifically, he will discuss the instrumentation, features, and uses for the new SRX beamline, highlighting its speed, adjustability, and versatility for probing samples ranging in size from millimeters down to the nanoscale. He will talk about complementary beamlines being developed for additional capabilities at NSLS-II as well.

Thieme earned a Ph.D. in physics from Georg-August-University in Germany in 1984. He held appointments as a scientist and group leader at Georg-August-University’s Institute of X-ray Physics, and during this time, focused on combining x-ray microscopy and x-ray spectroscopy methods, working at beamlines at synchrotron facilities worldwide, including the Advanced Light Source in Berkeley, Advanced Photon Source in Argonne, and NSLS at Brookhaven. He also was a consultant for the University of Science and Technology of China. He arrived at Brookhaven Lab in 2009 to lead the Sub-micron Resolution X-ray Spectroscopy group. Thieme is also an adjunct professor in Stony Brook University’s Department of Geosciences.