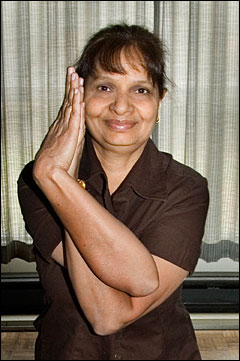 In January 2001, Ila Campbell volunteered to lead a yoga class in which she was a student. At the time, she had no idea that the instructor would not return. Today, almost seven years later, Campbell still leads the free Wednesday yoga class sponsored by the BERA Indo-American Club, from 12:10 to 12:55 p.m. each week.

Campbell, a customer support analyst in the Collider-Accelerator Department, teaches hatha yoga, which consists of some 200 asanas, or steady poses, designed to stretch and strengthen all parts of the body. The poses emphasize making the spine supple and increasing circulation. Breath control and meditation are also part of yoga, and these practices, along with the asanas, foster good health and deep relaxation.

Campbell began to learn yoga in 1967, when she was a student in a girls' boarding school, the Maharani Gayatri Devi School in Jaipur, India - the school that was the site of the Beatles' visit to India for five days in the late 1960s, during their more extended stay in India to learn meditation. Under the direction of the BBC, which was planning to air a program on yoga, all the students in the school were given yoga instruction every day. Campbell was one of 40 promising yoga students from the school that producers selected to star in the two-hour BBC film.

"For the next two years, to prepare for participation in the show, I practiced yoga three hours a day every day," Campbell said. "After that, yoga was a required course in the school."

Nowadays, Campbell practices yoga and meditation every morning. She says the yoga practice helps relieve her chronic back pain, which started with a fall on ice. Campbell also knows of others who were helped to overcome physical challenges through yoga. She said her 60-year-old uncle, when faced with the ordeal of coronary bypass surgery, decided to skip it and try a strict vegetarian diet, medication and 90 minutes of yoga every day. "The flow of blood through his three clogged arteries improved steadily, and now, ten years later, his arteries have created a natural bypass," she said.

"I believe in the power of yoga," Campbell said. "But it has to be practiced every day to be most effective. It does take discipline."

All BNLers are welcome to join Campbell's free yoga class on Wednesdays in the Brookhaven Center North Room. For more information, see her website. Campbell is not a certified instructor, so it is an informal meeting of yoga enthusiasts. If you have health problems, she recommends that you consult with your physician before practicing yoga.