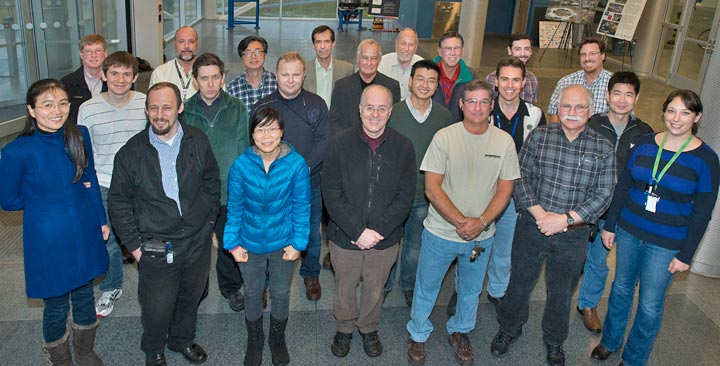 It takes great teamwork to commission the NSLS-II booster! (Because of shift work and conflicts, this is only half the team.)

At 0015, 15 minutes past midnight on December 31, 2013, electrons accelerated to the design energy of 3 billion electron volts (GeV) around the booster ring of the National Synchrotron Light Source II (NSLS-II). This was an important moment in booster commissioning, a critical phase of commissioning the NSLS-II injector system, which consists of a linear accelerator (linac), the booster, transport lines and a storage ring.

To commission the booster, many within the Photon Sciences Directorate, mostly from the Accelerator Division, have been working in shifts around the clock following a successful accelerator readiness review in the first week of November 2013 and authority granted on November 27 from the Department of Energy to begin commissioning.

Screenshot of one of the first successful booster ramps. The red trace is the booster energy and the blue is the beam intensity. Accelerated beam current is about 1.5 milliamps.

First, they turned on the linac, last operated in May 2012. In spite of that hiatus, the linac reached full performance of 200 million electron volts (MeV) in a few days. Tests included a check of radiation shielding, which revealed no unwelcome surprises.

Circulating beam in the booster was next established in mid-December. With the booster holding charge from a few hundred turns initially and then going up to a full second between injection cycles later, this proved that the machine is up to the standards of a ring.

Budker representatives were on site in December to assist with commissioning and have returned this month.

The team has now passed two milestones for the booster: establishing circulating beam and establishing beam at full energy. Before commissioning is finished, tests will be conducted to confirm that enough shielding was installed to protect occupied areas outside the booster tunnel from the high-energy x-rays produced in the booster. After that, the electrons will be extracted from the booster by a magnetic field and steered to a heavily shielded area called a beam dump. (When storage ring commissioning begins, other magnets will be powered to steer the beam away from the dump and into the storage ring.) The final test is continuous booster performance for eight hours, all the while showing the beam operating at specified parameters.

The 24/7 shift work continues – a matter of working through various issues with the injector subsystems, such as the RF system, power supplies, controls and diagnostics, plus fine tuning accelerator operating conditions to optimized set points.

According to Blum, the team expects to meet commissioning goals for the 158-meter booster by the middle of February. Commissioning of the 800-meter storage ring should begin in March. First, however, Photon Sciences must pass another round of readiness reviews related to that larger ring.