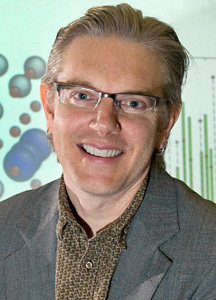 UPTON, NY—Simon Billinge, a physicist at the U.S. Department of Energy’s Brookhaven National Laboratory and a professor at Columbia University’s School of Engineering and Applied Science, has been made a Fellow of the Neutron Scattering Society of America (NSSA) in recognition of his “seminal contributions to the field of local structure and nanostructure studies using atomic pair distribution function methods and [his] impact on the field of neutron diffraction.”

“Being awarded fellowship in NSSA is particularly gratifying,” said Billinge, “because the fellows program is relatively new, which makes the bar for acceptance unusually high.”  The number of fellows named per year may not exceed 0.5 percent of the Society’s membership.  Billinge added, “It is an enormous honor to be named in a cohort that includes former directors of large facilities and other scientists that I have looked up to over the years.”

The basis of the award, the atomic pair distribution function technique, uses the information from neutrons scattered from materials to discern the atomic arrangements in nanoparticles, allowing scientists to better understand the link between structure and function. This information paves the way toward rational design of new materials with improved properties for applications from medicine to new energy-saving technologies.

"At the nanoscale, materials have complex personalities…with these emerging methods we can eavesdrop on their conversations.”

To discern atomic-level structures, scientists bombard a sample with a beam of neutrons and measure how the particles bounce off the atoms therein. The result is a diffraction pattern that can be translated into measurements of the distribution of distances between pairs of particles within a given volume — the atomic pair distribution function (PDF). Scientists then use computational programs to convert the PDFs into 3-D models.

Billinge’s research has pushed the technique into new domains of applicability by developing novel methodologies and modeling approaches, and making them available to a broad community of chemists, physicists, materials scientists, and earth scientists.  The demand for use of the technique, and its scientific impact, has grown rapidly. Today, dedicated PDF instruments are operating at all the world’s major spallation neutron sources, the kind of neutron source appropriate for this type of measurement.

Billinge and his group have applied the method to a wide range of materials, including: studying the emergence of exotic superconductivity in cuprate materials; imaging battery cathode materials in operating batteries; detecting microscopic amounts of nanometer (billionths of a meter)-sized pharmaceutical drug material suspended in solution; and studying fossilized sharks’ teeth.

“At the nanoscale, materials have complex personalities, just like people”, said Billinge, “and with these emerging methods we can eavesdrop on their conversations.”

The Neutron Scattering Society of America (NSSA) was formed in 1992 and is an organization of persons who have an interest in neutron scattering research in a wide spectrum of disciplines. Through the NSSA Fellowship Program, the NSSA recognizes members who have made significant contributions to the neutron scattering community in North America through original research, innovative applications of neutron scattering, promotion or development of the technique, or service to the NSSA or neutron community.

Billinge’s work at Brookhaven Lab is supported by the Department of Energy’s Office of Science.