Stephen Brooks uses his own custom software tool to fire electron beams into a virtual model of proposed accelerator designs for eRHIC. The goal: Keep the cost down and be sure the beams will circulate in this proposed next-generation machine. 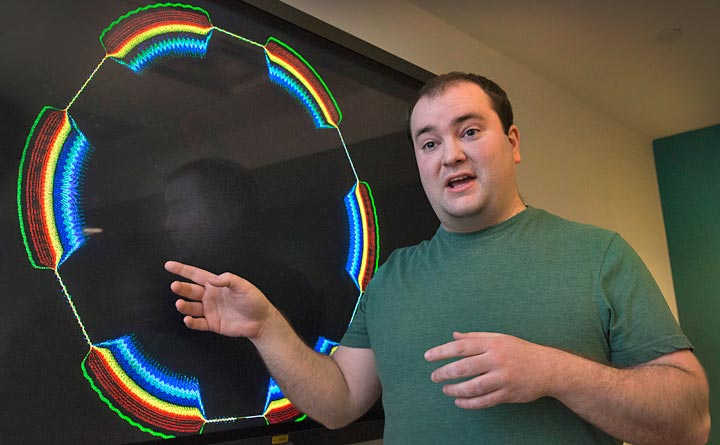 If you walk by room 201 in Building 911 at the U.S. Department of Energy’s Brookhaven National Laboratory, you might think Stephen Brooks is playing a cool new video game. But Brooks is doing important, innovative work. He’s using his own custom designed software to create a 3-D virtual model of the electron accelerator Brookhaven physicists hope to build inside the tunnel currently housing the Relativistic Heavy Ion Collider (RHIC). His mission is to put the virtual pieces together and help test out designs for eRHIC—a proposed machine that would provide unforeseen insight into the inner structure of protons and heavy ions.

“We can use this code to test that the individual accelerator components in the machine are compatible with each other when they are assembled together.”

“Once the eRHIC layout is in my code, I put beams through it to verify it works,” Brooks said. “But I can also add errors in the alignment of the magnets, beams, and so on to verify it will work in a practical setting.”

By work he means produce extremely focused high-energy electron beams to pierce into the very heart of RHIC’s counter-circulating protons or heavy ions to create precision 3-D images of gluons—the particles that bind quarks within protons and neutrons, thus imparting visible matter with 99 percent of its mass. This proposed electron-ion collider would open a new window into nuclear matter, ensuring U.S. leadership in the field for the next several decades. And building such a machine by adding an electron accelerator to the existing RHIC complex would be a cost-effective strategy for achieving this goal.

But keeping the cost down and ensuring functionality of the hundreds of different accelerator components takes planning to be sure things go right.

A flyover of the proposed eRHIC accelerator made with Brooks' custom design tool.

While there are many codes that can track particles through accelerators, the fully 3-D, interactive nature of Brooks’ code, and the ability to incorporate complex accelerators the size of RHIC, makes it unique.

Using a mouse to navigate from a birds-eye view to a close-up, 3-D, edge-on view of the magnets and the beams circulating inside the machine, he explains, “We can use this code to test that the individual accelerator components in the machine are compatible with each other when they are assembled together.” And to be sure those components will fit within the existing RHIC tunnel, the model incorporates a conventional architectural drawing including  physical constraints like concrete walls.

Even more innovative, Brooks’ program incorporates an “evolutionary algorithm optimization feature”—essentially an artificial intelligence mode that can vary any aspect of the accelerator and search for the best design to achieve a particular objective by running repeated simulations.

One goal is to track and minimize the amount of synchrotron radiation emitted by the electron beam. That’s energy that spews off tangent to the charged particles’ circular path, like water droplets flying off a wet towel swung around in a circle, gradually depleting the beam’s energy.

“The design tool also determines, for a given layout of magnets and sequence of beam energies, whether each beam will be focused in a stable way and not spread out in size and become unuseable,” Brooks said.

Two rings are better (and cheaper) than six

Testing different designs and parameters, Brooks and other accelerator scientists arrived at a plan that circulates multiple beams of electrons at a range of energies within each of two electron accelerator rings. It incorporates an innovative “non-scaling, fixed field, alternating gradient” (FFAG) accelerator design originally developed by Brookhaven physicist Dejan Trbojevic, who supervises Brooks.

The “alternating gradient”—alternating directions of the magnetic field—keeps the design relatively compact. “Fixed field” means that beams don’t have to be injected periodically and ramped up to reach higher energy. Instead, the beam can be on continuously as it is brought up to “speed.” And because non-scaling FFAG accelerators can be made out of fairly standard accelerator magnets, such a design would achieve high collision rates while controlling costs.

“Trbojevic realized that you can build magnet channels with stronger focusing than normal that can tolerate a large range of beam energies, with the beams of different energy transported side-by-side of each other within the same ring,” Brooks said. “At eRHIC, the beams would spiral through the machine with the external linear accelerator adding energy each turn, and the beam then following the next path farther out but still within the same beam pipe.”

Brooks’ optimization software tool helped the team identify the ideal design: with five electron beams in a low-energy ring, spanning a factor of 5x in energy, and up to 11 electron beams in a high-energy ring, spanning a factor of 2.7x. This design, fitting all these beams within two stacked accelerator rings instead of the six that were called for in an earlier design, represents a significant cost savings.

So, with its results pointing to fewer rings, relatively low-cost magnets, continuous beam, minimized energy loss, and a plan for how to absorb that lost energy, Brooks’ “gaming” with the eRHIC accelerator design seems to be paying off.