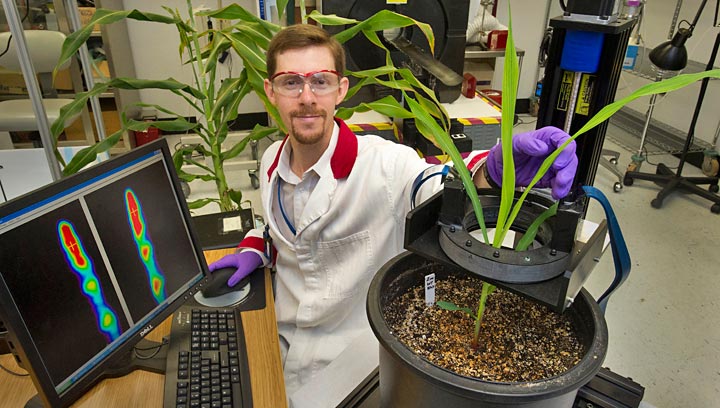 Brookhaven Lab plant scientist Benjamin Babst with corn and sorghum plants. Studies in model plants such as pea, like the one described below, could point to ways to improve these bioenergy crops.

A new study published in the Proceedings of the National Academy of Sciences by scientists at the University of Queensland, Australia, overturns a long-held theory in plant science. Researchers at the U.S. Department of Energy’s (DOE) Brookhaven National Laboratory who are co-authors on this paper conducted critical radiotracer studies that support the new theory that plant sugars play a dominant role in regulating branching at plant stems. While branching has relevance in agriculture, it is also very important in bioenergy crop production.

"Only a few labs in the world have the capability, using the carbon-11 radioisotope, to do the type of experiment that we did.”

Brookhaven plant biologist Benjamin Babst and Brittany Wienclaw, who was a summer intern as part of the DOE Science Undergraduate Laboratory Internship program at Brookhaven while working on her degree at the University of New Haven, conducted an essential experiment to verify that sugars play a key role in apical dominance and the regulation of plant bud growth. The aim of their part of this study was to test if sugars produced in leaves via photosynthesis move downward through plants in greater quantities when shoot tips are removed, and quickly enough to trigger bud growth farther down.

To trace the sugars, the scientists first had to add a radioactive “tag” to these molecules. The tag they used was a positron-emitting isotope of carbon, carbon-11, incorporated into carbon dioxide. When they administered this labeled CO2 to plant leaves, the plants incorporated the radioactive carbon into sugars via photosynthesis. The scientists then tracked the labeled sugars throughout the plant using detectors placed along the plant stem.

The time taken for the 11C-labeled sugars to move between two detectors on upper and lower regions of the stem was used to calculate sugar transport speeds. The scientists also monitored how much sugar accumulated at different positions, including where previously dormant buds began to sprout in response to clipping the plants’ apical shoots.

“We found that upon decapitation of the plant, there is a rapid increase in sugar delivery to the buds, which promotes bud outgrowth,” Babst said. The sugars move about 100 times faster than auxin, a plant hormone previously believed to regulate bud growth. This finding supports the idea that sugar—not auxin—is the key signaling molecule for this immediate response to clipping.

The Brookhaven experiment further supports the idea that the demand for sugar in intact, actively growing apical shoots limits the availability of this nutrient to the rest of the plant, thus normally keeping lower branch bud growth in check.

“Only a few labs in the world have the capability, using the carbon-11 radioisotope, to do the type of experiment that we did to see rapid changes in carbon allocation immediately following a treatment, such as shoot tip removal,” Babst said.

“Ben's work was critical for this study,” said Christine Beveridge of the University of Queensland, Australia, who was the lead author on the paper. “His finding that sugars move at 150 cm per hour along the stem is amazing. The technique available in his lab is truly first class and an invaluable resource for plant scientists worldwide.”

Brookhaven’s role in this research was funded by the U.S. Department of Energy’s Office of Science, which has an ongoing interest in furthering understanding of plant functions that have relevance to generating bioenergy.

For example, said Babst, “Branching has a big impact on the display of a plant’s leaves to capture sunlight, like arrays of solar panels. Branching can also enhance or hurt the performance of plants growing amongst competitors. And the amount of branching also influences how much biomass a plant has—of particular interest because stems represent the bulk of the biomass that we can harvest for biofuels.”

Understanding the factors that influence branching in the pea plants used in this study may offer valuable insights to help optimize the growth of bioenergy grasses such as switchgrass and sorghum—where, because the buds and shoot tips are inaccessible without damaging the plant and changing function, it would be impossible to tease out these details.