The following article was first issued by the Cavendish Laboratory at the University of Cambridge. Brookhaven National Lab physicist Mark Dean was part of the experimental team that performed the ultra high precision and ultra low temperature measurements reported in the research paper. By analyzing this data, the scientists inferred the behavior of the electric dipoles in the material and how they are affected by quantum fluctuations.

Recent insight and discovery of a new class of quantum transition opens the way for a whole new subfield of materials physics and quantum technologies.

This week an article in Nature Physics reports the results on quantum properties of ferroelectric crystals, led by Stephen Rowley, together with Siddharth Saxena and Gilbert Lonzarich of the Cavendish Laboratory. They explore a new type of quantum phase transition in these seemingly ‘inert’ materials.

"Understanding the effects of quantum fluctuations in these simple insulating compounds should help in our efforts to understand more complex phenomena in magnetic metals.”

Quantum phase transitions are subtly different from the familiar classical phase transitions of which an example would be the freezing of water or melting of ice as its temperature is varied. In such a transition, matter transforms into a more or less ordered state depending on whether its temperature is decreased or increased. However, if the temperature was hypothetically fixed at absolute zero and another parameter, such as pressure was applied to bring about a transition, it would occur without any change in entropy, i.e., it would be an 'order to order' transition. In the neighborhood of such a zero entropy phase transition one often finds the emergence of superconductivity or other forms of novel quantum order.

Ferroelectrics are materials comprising electrical dipoles in the unit cells of the crystalline lattice (see Figure 1). Due to the interactions between them, these dipoles may line up resulting in ordered electric fields permeating the crystal. By using pressure, chemical, or isotopic substitution, ferroelectrics can be tuned into the quantum critical regime where dipole fluctuations exist in an effective four-dimensional space and arise due to criticality of quantized polar lattice vibrations. This physics is very different to that found in other quantum critical systems which focus on electronic or spin degrees of freedom. Intriguingly the fluctuation spectrum found in quantum critical ferroelectrics is the same as that in elementary particle physics—propagating modes in three spatial dimensions plus one time dimension. 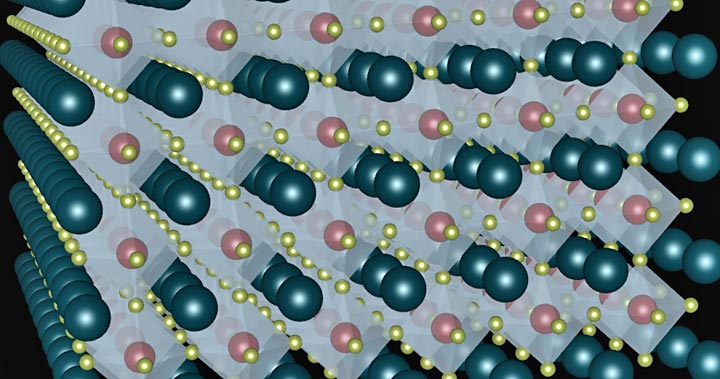 The article in Nature Physics highlights the amazing transformation of the crystal properties as a ferroelectric approaches its quantum critical point. It describes how a theory was developed to understand the phenomena successfully and quantitatively in a number of materials without adjustable parameters (Figure 2). The theory included the effects of coupled fluctuating polarization and quantum strain fields, which explained the observation of small peaks in the measured dielectric susceptibility below 4K. 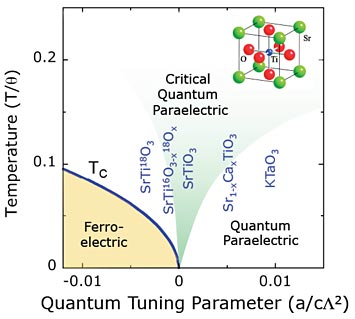 The most striking effects were observed in the mineral strontium titanate (SrTiO3) using custom made high precision measurement apparatus developed in Cambridge. SrTiO3 crystals may be cut into beautiful gems as shown in Figure 3 and have been used by artisans and jewelers for decades. They have a range of important technical applications in optics and electronic devices. When cooled below 50K the crystals begin vibrating with highly anharmonic quantum fluctuations, which drastically change the measured physical properties (Figure 2). Crucially the thermodynamic properties depend on the time dependent properties of the fluctuations, a fact which is not the case near a classical critical point. 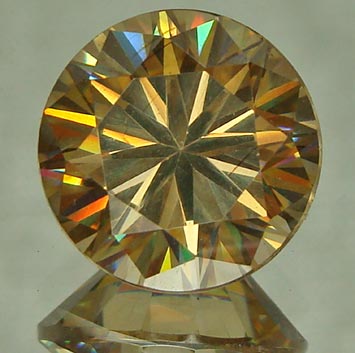 Going beyond ferroelectric insulators, electron charge carriers may be introduced for example via voltage gating or chemical substitution. The first of the oxide superconductors—doped SrTiO3—discovered in the 1960s, is of this kind. Superconductivity appears to arise in the intriguing anti-adiabatic limit, which poses a major challenge to theory. The understanding of superconductivity in SrTiO3 and KTaO3 has remained particularly elusive. New measurements and theory led by the Cambridge team have shown how the novel polar optical phonons existing close to the ferroelectric quantum critical point can mediate this type of superconductivity. This involves a gap function that oscillates in time to avoid repulsive parts of the time dependent electron-electron interaction potential. Such knowledge is already guiding a search for new types of superconductor and other correlated states of quantum matter.

Further unraveling the quantum nature of ferroelectrics, not only elucidates the missing pieces in our understanding of phenomena ranging from high temperature superconductivity to the emergent effects in insulators, but also allows us to think about how this can inform developments in quantum computing and on-chip refrigeration of electronic devices. Moreover within the developments of fundamental physics, models constructed by Rowley and collaborators excitingly reach further into analogies with particle physics and cosmology.