A New Approach to Engineering the Materials of the Future 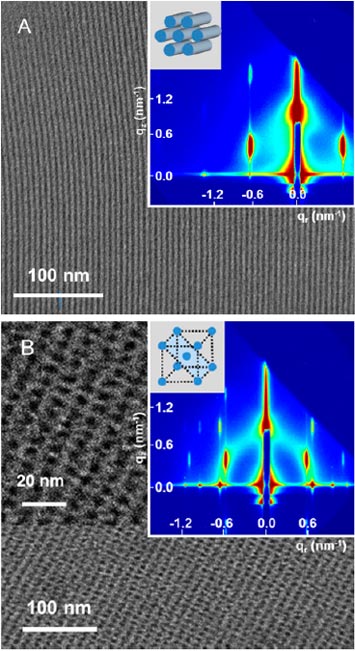 Some of the most interesting and fascinating electronic devices that will someday be available to consumers, from paper-thin computers to electronic fabric, will be the result of advanced materials designed by scientists. Indeed, some remarkable discoveries have already been made. To innovate further, scientists must learn how to precisely engineer the chemical structures of materials at the nanoscale in such a way as to yield specific macroscopic properties and functions.

A research group, jointly working at the National Synchrotron Light Source, has found a new way to do just that. They have synthesized a new class of macromolecules that organize themselves, or “self-assemble,” into various ordered structures with feature sizes smaller than 10 nanometers. Called “giant surfactants,” these large molecules mimic the structural features of small surfactants (substances that significantly lower the surface tension between two liquids, such as detergents), but have been transformed into functional molecular nanoparticles by being “clicked” with polymer chains. The resulting materials are unique because they bridge the gap between small molecule surfactants and traditional block copolymers and thus possess an interesting “duality” in their self-assembly behaviors.

“This class of materials provides a versatile platform for engineering nanostructures that have features smaller than 10 nanometers, which is a scale that is very relevant to the blueprints of nanotechnology and microelectronics,” said the study’s corresponding scientist Stephen Cheng, a researcher in the University of Akron’s College of Polymer Science and Polymer Engineering. “More broadly, we are also interested in how our results could help advance our understanding of the chemical and physical principles that underlie self-assembly.”

Surfactants play a huge role in our everyday life, although most people are unaware of them. They are present in household cleaners and soaps, adhesives, paint, ink, plastics, and many, many other products. Naturally, they are a key part of materials research.

Giant surfactants have the potential to be even more versatile than their smaller counterparts because they have the advantages of both a polymer and a surfactant. They are of particular interest to the electronics industry because they can spontaneously self-assemble into nanodomains just a few nanometers in size. This length scale must be achieved in order to allow the continual downsizing of computer chips but proven very difficult to achieve for conventional technologies. The production of nanopatterned thin films – which are the foundation of modern computer chips – could be directly affected by giant surfactants. If films can be produced with smaller nanoscale features, they could lead to denser, faster computer chips.

The group used several techniques to study different giant surfactant samples in thin-film form, as well as in bulk form and in solution. These techniques included grazing-incidence small-angle x-ray scattering (GISAXS) at NSLS beamline X9. GISAXS is suited to studying thin film samples that have ordered nanoscale features, typically between 5 and 20 nanometers, and can tell researchers about the shape, size, and orientation of these features, among other information. It is widely used to study self-assembled thin films with nanoscale features.

This research is published in the June 18, 2013 issue of the Proceedings of the National Academy of Sciences. The team, which includes scientists from the University of Akron, National Tsing Hua University (Taiwan), McMaster University (Canada), and Peking University (China), has also described this research in a pending patent application.