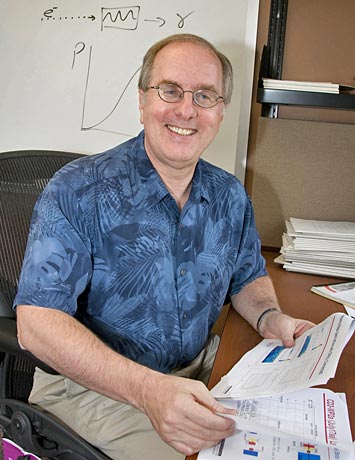 Samuel Krinsky, senior physicist in the Photon Sciences Directorate, passed away on April 26, 2014. Krinsky was 69 years old. According to his wife, Faith, he died soon after receiving a diagnosis of glioblastoma multiforme, an aggressive form of brain cancer.

After earning a B.S. in physics from MIT in 1966 and completing a Ph.D. in physics from Yale University in 1971, Krinsky took a research associate position at Stony Brook University, where he met Martin Blume, then holding a joint appointment with the university and with Brookhaven National Laboratory.

“I proposed a condensed matter physics problem to Sam, and we wrote early papers together,” said Blume, who later became Brookhaven’s deputy Laboratory director and then left the Lab to join the American Physical Society as editor-in-chief of Physical Review. “Recognizing Sam’s abilities, I brought him to Brookhaven and worked to retain him and to support him as he took on more and more responsibility as a scientist and an administrator. I have always had the highest regard for Sam.”

Krinsky spent his entire career at Brookhaven. He started as an assistant physicist in the Physics Department in 1973 and was promoted to associate physicist in 1975. In 1977, he transferred to the Alternating Gradient Synchrotron Department, where he began learning accelerator physics under Ken Green and Renata Chasman. His promotion to physicist came in 1978, and he received tenure in 1980.

“Sam, Rena, Ken and John Blewett formed the nucleus of the group that later became the NSLS Department in 1982,” recounted Richard Heese, accelerator physicist in the Photon Sciences Directorate.

At National Synchrotron Light Source (NSLS), Krinsky was promoted to senior physicist in 1985 and served in various leadership roles: head of the NSLS Accelerator R&D from 1985 to 2001, deputy chair of the NSLS from 1986 to 2001, and manager of the FEL program from 1999 to 2002. In January 2008, he became group leader of Accelerator Physics in the NSLS-II Project to construct the NSLS-II facility. At the time of his death, Krinsky was managing the accelerator physics group within the Photon Sciences Directorate.

Krinsky is survived by his wife, Faith, and daughter, Sylvia. Son Benjamin died of glioblastoma multiforme in 1999 while a student at MIT.

More about Krinsky, and comments from his colleagues, are included in this article on the Photon Sciences Directorate website.