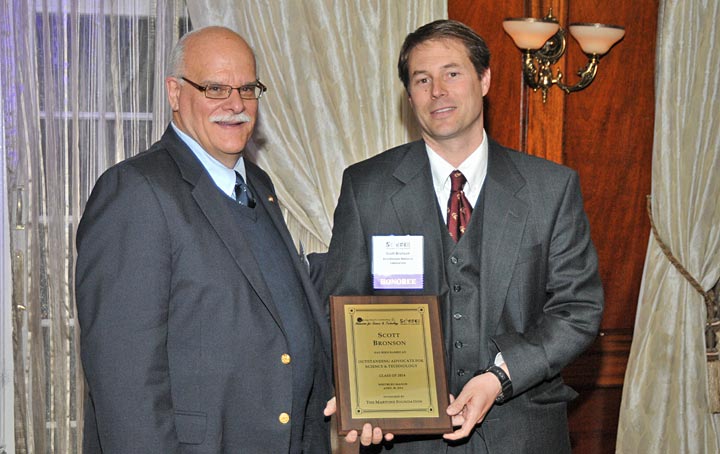 Scott Bronson, manager of Brookhaven Lab's K-12 educational programs, accepts an award from John Tanacerdi, director of the Science Museum of Long Island. Bronson received the award in recognition of his efforts and leadership promoting education in science and technology.

Scott Bronson, manager for the K-12 programs in the Lab’s Office of Educational Programs (OEP), was recently named “Outstanding Advocate for Science & Technology” by the Science Museum of Long Island. Bronson was honored at a ceremony for his outstanding contributions toward the advancement of science and technology education.

As manager of K-12 programs at Brookhaven, Bronson develops educational workshops for local teachers and students that align with the Lab’s mission. His team welcomes over 38,000 students annually to the Lab’s Science Learning Center, where students participate in hands-on science activities. Bronson also oversees the Elementary School Science Fair and Maglev and Bridge contests held at the Lab each year.

Additionally, Bronson is skilled at writing grant proposals and encourages scientists to contact him for help if they are writing a scientific grant proposal that contains an educational plan. ““I am happy to help researchers save a lot of time by taking on much of the non-research education components of a grant,” says Bronson.  “Even if an educational component is not required but only encouraged in the grant proposal, OEP’s experience might help make a difference, including a difference for some future scientists.”

Bronson joined Brookhaven Lab in 2004 and holds 11 copyrights for science education kits he developed with Brookhaven scientists. Focusing on biology, engineering and environmental chemistry, the kits are used as hands-on learning tools in the classroom for middle school, high school and college students. In 2006, Bronson was recognized by Battelle Memorial Institute as Brookhaven National Laboratory’s Inventor of the Year for the development of these kits. Bronson’s education and science workforce development initiatives have been funded by DOE, the National Science Foundation, National Institutes of Health, and the New York State Foundation for Science, Technology, and Innovation. He has experience in federally and privately funded STEM (Science, Technology, Engineering and Math) training programs and has taught molecular biology teacher workshops in Singapore for the Singapore Ministry of Education.

Bronson began his career in science as a James Simons Summer Research Fellow at Stony Brook University. He earned bachelor's degrees in both molecular biology and marine biology from the Florida Institute of Technology in 1994, before joining Cold Spring Harbor Laboratory as a research technician. In 1997, he began working as an education coordinator at the laboratory's DNA Learning Center and in 2004, he earned a master's degree in science education from Long Island University's C.W. Post College. From 2000-2004, he was also a course instructor at the Watson School of Biological Sciences at Cold Spring Harbor Laboratory. He has appeared on PBS for Scientific Frontiers - The Gene Hunters and the award-winning documentary Race - The Power of an Illusion.