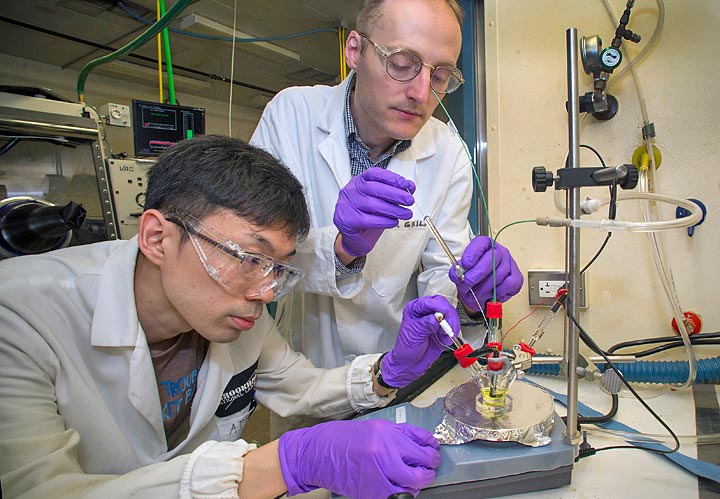 Wouldn’t it be nice to use solar- or wind-generated electricity to turn excess carbon dioxide—one of the gases trapping heat in Earth’s atmosphere—into fuels and other useful chemicals? The process would store up the intermittent solar or wind energy in a form that could be used when and where it was needed, including in transportation applications, all while getting rid of some greenhouse gas. The trick is to find the right catalysts to facilitate the conversion of CO2 with high activity and minimal energy input.

"Our experiment resulted in an improvement in both the energy efficiency and kinetics of the CO2 reduction process...”

One useful product of such CO2 reduction reactions is carbon monoxide (CO), a building block for making methanol and liquid hydrocarbons that could replace gasoline. So far, the catalysts tried for this reaction are often lacking in efficiency and/or specificity; either they take too much energy, are too slow, or make too wide a variety of products to be useful. Now a group of chemists at the U.S. Department of Energy’s Brookhaven National Laboratory reports a new approach: performing the electrochemical reaction in an ionic liquid, which acts as both the solvent and electrolyte.

The process—described in a paper recently published in The Journal of Physical Chemistry Letters, published by the American Chemical Society (ACS)—was shown to boost both the energy efficiency and speed of the reaction for a well-known catalyst, with no loss of product selectivity, compared to the same reaction in a standard organic solvent solution. The paper was just selected as an ACS Editors’ Choice article. Only one such article is selected each day from the entire portfolio of ACS journals.

Ionic liquids are salts made of positive and negative ions, similar to the sodium and chloride ions of table salt, but in liquid form at room temperature. Their blend of positive and negative charges makes them excellent conductors (electrolytes) and gives them unique properties, resulting in their recent emergence as superior alternatives to conventional organic solvents for many energy-related applications.

Ionic liquids have previously shown some promise at improving the energy efficiency of the direct electrochemical reduction of CO2 at metal electrodes. The new work, led by Brookhaven Lab chemist David Grills and Yasuo Matsubara of the Japan Science and Technology Agency, is the first attempt to use ionic liquids to improve CO2 reduction using a homogeneous electrocatalyst—where both the reactants and catalyst are dissolved in a liquid. Homogeneous CO2 reduction catalysts are generally more selective in the products they produce.

“Our experiment resulted in an improvement in both the energy efficiency and kinetics of the CO2 reduction process for the catalyst we studied, with no loss of product selectivity,” Grills said.

The reason for the improvement, the scientists suspect, is a special interaction between one of the ionic liquid’s ions and an intermediate form of the catalyst that results in a lowering of the activation energy required for the reaction.

The new approach will undoubtedly inspire a great deal of follow-up effort.

“We expect that these initial results will open up new possibilities for studying ionic-liquid-enhanced CO2 reduction with a range of homogeneous catalysts and different types of ionic liquids,” said Matsubara.

The work may even point the way to catalytic systems that can directly convert CO2 to other useful chemicals.

Brookhaven’s role in this research was funded by the DOE Office of Science.