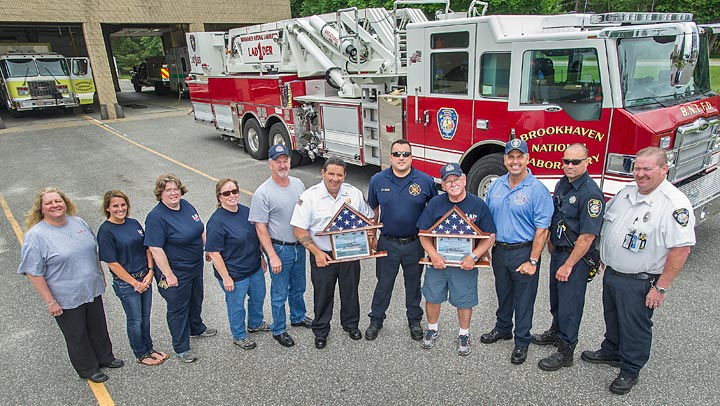 Brookhaven Lab firefighter Thomas Sidik says he was happy to once again put on his firefighting gear, catch up on required training, and get back to the business of protecting Laboratory employees, visitors, and the Lab site. In June 2013, Sidik, a member of the United States Coast Guard’s (USCG) Port Security Unit 301, was deployed to serve at Guantanamo Bay, Cuba. He returned to the United States just a few weeks ago.

Serving on the port security crew, Sidik spent countless hours on a USCG boat patrolling the waters off the coast of Cuba. “It was an important mission, and one that I was proud to do,” said Sidik.

But knowing how difficult it is to be away from home, the Lab’s AdoptaPlatoon group made sure that Sidik received “goodie” packages on a regular basis.

“Coming back to my quarters and finding one of those large boxes filled with all kinds of candy, games, CDs, and simple supplies like new socks, put a big smile on my face and those of my fellow guardsmen, “ said Sidik.  “I never thought such simple things could be so important. I can’t thank the AaP enough for helping to make my time in Cuba a little more comfortable by sending those packages from home.”

But Sidik did find a way to express his thanks in a very special way. Upon his return to work he presented the AaP and his fellow firefighters with American flags displayed in a triangular wooden ceremonial case.

“Both of these flags were flown on the patrol boat the week of 9-11,” said Sidik.  “I knew these flags would have special meaning to my co-workers and I wanted them to know exactly how much their support and those boxes from home were appreciated.”

Besides the general excitement of the deployment, Sidik did get additional excitement in October. “I was able to come home for a week to be with my wife Kristen and welcome our new daughter Kayli Ann into the world,” said Sidik with a beaming smile. “I’m very proud to serve our country, but I’m also happy to be home with my family and back to work. Life is good.”

“We are all happy that Tom has returned safely and is back on duty here at the Lab,” added Fire Chief Charles LaSalla. “He is an asset to our firefighting team.”

In his spare time, Tom Sidik is also a volunteer firefighter with the Hauppauge Fire Department.