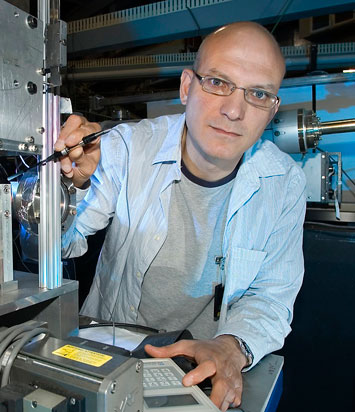 Darío Arena, a physicist in Brookhaven Lab's Photon Sciences Directorate, was awarded tenure for his achievements in the field of spin ordering and dynamics in condensed matter systems and complex magnets, and for his development of related scientific programs at the National Synchrotron Light Source (NSLS) and NSLS-II beamlines.

"Darío has clearly demonstrated creative and independent accomplishment of a high order in the performance of original research, and has achieved a deserving reputation and stature in the international community," said Qun Shen, who was the Photon Division Director when Arena was granted tenure and today is the Photon Sciences Directorate's Interim Deputy Associate Laboratory Director for Science.

Arena studies complex magnetic materials, including those used in electricity generators and computer hard drives. One of his most notable accomplishments was obtaining signals to track down specific elements' energy-loss processes in the dynamics of ferromagnetism, the process by which materials become magnets. Arena did this by combining a widely used technique for studying magnetic materials called ferromagnetic resonance with x-ray spectroscopy—taking advantage of the time structure in a typical synchrotron radiation source like a facility such as the NSLS.

In addition, Arena made significant contributions in discovering a previously unreported magnetic configuration in heterogeneous thin-film devices—particularly for a compound of the elements lanthanum (La), strontium (Sr), manganese (Mn), and oxygen (O), the compound LaSrMnO3. His discovery of a possible electronic reconstruction in the Mn orbitals was an important finding in understanding details of how the magnetic state at interfaces may directly affect electrons and spin transport.

Arena has become a well-recognized leader in his field, having served on many advisory and review committees, including the advisory committee for the Magnetism and Magnetic Materials Annual Conference, the program committee for the International Magnetics Conference, and the technical committee for the IEEE Magnetics Society. He is also an academic editor for the American Institute of Physics' AIP Advances journal and an adjunct professor teaching physics at Stony Brook University.

Arena earned a Ph.D. in physics from Rutgers, the State University of New Jersey, in 2000. He was a postdoc at Lawrence Livermore National Laboratory in California and awarded a National Research Council Research Fellowship in 2001, and was affiliated with the Naval Research Laboratory in Washington, D.C. while stationed at the NSLS. He officially joined Brookhaven Lab as a postdoc in 2003. At the Lab, he was made an assistant physicist in July 2006, an associate physicist in 2008, and physicist in 2010.