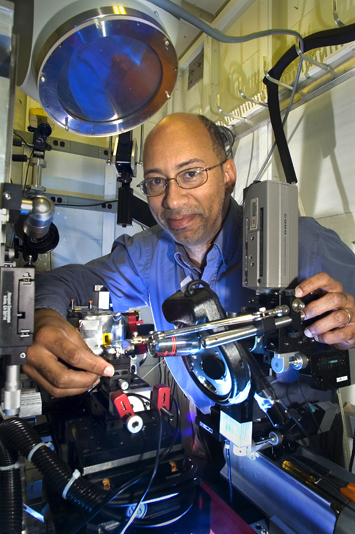 Kenneth Evans-Lutterodt, a physicist in the Photon Sciences Directorate, was awarded tenure for his research and leadership in the field of x-ray physics, particularly in the development of novel x-ray optics and coherence measurements and applications.

“Ken has clearly demonstrated creative and independent accomplishment of a high order in the performance of original research in the area of novel x-ray optics and coherence applications, and has achieved a deserving reputation and stature in the international community,” said then Photon Division Director Qun Shen, who is now the interim Deputy Associate Laboratory Director for Science in the Photon Sciences Directorate.

During his scientific career, Evans-Lutterodt made considerable contributions to several related research fields using synchrotron radiation, including surface structures and phase transitions, strain fields in semiconductor epitaxial thin-films, roughness at surfaces and interfaces, and novel x-ray optics and coherence methods. A new x-ray optic based on the so-called kinoform lens, which he co-developed with Aaron Stein of the Center for Functional Nanomaterials, has been used at the National Synchrotron Light Source (NSLS) and other synchrotron x-ray facilities. He is the spokesperson for the X13B beamline at the NSLS and has been responsible for the scientific programs at the beamline as well as beamline instrumentation and upgrades. Evans-Lutterodt is currently on the staff of the In-Situ Resonant Scattering beamline in the NEXT project, and the Materials Physics and Processing beamline in the NxtGen project

After receiving his Ph.D. in physics from MIT, Evans-Lutterodt became a member of the technical staff in the Condensed Matter Physics Research Department at Bell Labs. His research program used the Bell Labs beamline X16 at NSLS. When he became the manager of the User X-Ray facility, he also acquired responsibility for the X16 beamline. He became a Brookhaven scientist in 2003. He has published 44 refereed articles, 22 conference proceedings, and has given dozens of invited talks.