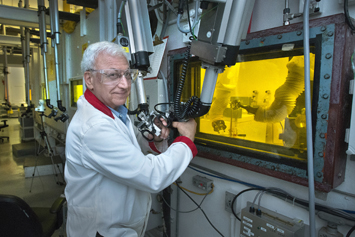 Leonard Mausner of Brookhaven Lab's Collider-Accelerator Department (C-AD) was awarded tenure for his creative contributions to developing and producing medical radioisotopes. He was also recognized for his leadership in improving and overseeing operations for the Brookhaven Linac Isotope Producer (BLIP) facility and the associated Target Processing Laboratory.

"The continued future success of our Medical Isotope Research and Production program, which is of great importance for providing improved healthcare for sick patients on a global scale, is in no small way assured because of Dr. Mausner's continued groundbreaking accomplishments," said C-AD Chair Thomas Roser.

The BLIP facility at the Lab produces medical isotopes that are used for research and nuclear medicine, but are not commercially available. Mausner has pursued scientific research in producing, purifying, and using new diagnostics and therapeutic radioisotopes. In his decades of developments and advances, one system for which Mausner led development produced significant quantities of the radioisotope Xeon 127, which is used for lung imaging studies. This was the first BLIP product approved for human use and delivered to hospitals. The current isotope developed by Mausner and produced at BLIP for human use is strontium-82, parent of the very short-lived rubidium-82 used for cardiac imaging. Mausner also oversaw two major upgrades at the BLIP facility to improve performance.

As supervisor of the Medical Isotope Research and Production group's research and development portfolio and upgrade projects, Mausner currently heads the Lab's effort to develop actinium-225 for cancer therapy, in collaboration with Los Alamos National Laboratory and Oak Ridge National Laboratory, and another BLIP upgrade to install a beam raster system. He is also collaborating on target designs to test different materials' abilities to withstand extreme environments for components that could be used at the Large Hadron Collider at CERN in Europe and the Long Baseline Neutrino Experiment being developed in the United States.

Mausner earned a Ph.D. in nuclear chemistry from Princeton University in 1975. After several years at both Argonne and Los Alamos National Laboratories, Mausner arrived in Brookhaven Lab's Medical Department and began his time at the BLIP facility as an associate scientist in 1981. He was made scientist in 1983, and senior scientist and program manager for the Medical Isotope Research and Production Program in 2003. He joined C-AD when BLIP operations were moved from the Medical Department in 2010.