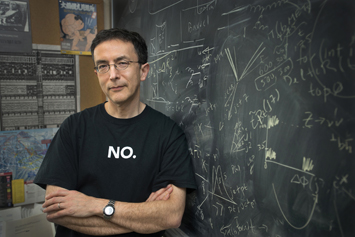 "George is an internationally recognized leader in the intellectual and technical frontiers of high energy physics," said Physics Department Chair Laurence Littenberg. "He continues to push physics into uncharted territory, using his care, expertise, and creativity to shape some of the most exciting and ambitious research at the LHC."

Before turning his attention to SUSY, Redlinger played a key role in the rare kaon decay program at Brookhaven's Alternating Gradient Synchrotron. He helped lead the analysis—including pioneering the technique of "blind analysis"—that led to the breakthrough first observation of the rare decay K+→π+νν in 1997 during the E787 experiment. Redlinger developed new methods for estimating background rates in particle physics and designing data-driven techniques essential for distilling subtle and rare signals in particle physics. In 2011, as part of his ongoing work on the LHC's ATLAS experiment, Redlinger co-authored the first published LHC SUSY results.

Redlinger received his Ph.D. in physics from the University of Chicago in 1989, working on the CDF experiment at Fermilab's Tevatron collider. After a term as a CERN fellow working on silicon tracking and the measurement of Z boson decays to bottom quarks at the ALEPH experiment of the Large Electron-Positron collider, he joined Canada's TRIUMF laboratory as a postdoc in 1992, enticed by the prospects of the then-planned (but ultimately canceled) KAON factory. Shortly thereafter he began collaborating with Brookhaven Lab on rare kaon decay. In 1998, he joined Brookhaven as an assistant physicist, rising to staff physicist in 2002, working on the prematurely canceled kaon decay experiments E949 and KOPIO. He joined the ATLAS collaboration in 2005, earned a continuing appointment in 2007, and began co-leadership of the SUSY search in 2009.