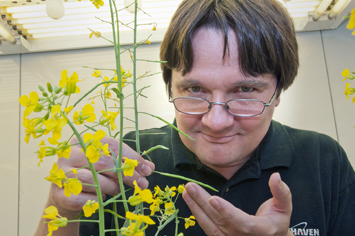 Jorg Schwender received tenure for his creative research to advance fundamental understandings of central carbon metabolism in plants—particularly for research on plant seed oil synthesis with integrated experimental and modeling approaches that involve isotope labeling, metabolic flux analysis, and computational modeling and simulation of metabolic networks. This research provides fundamental knowledge of biochemical processes that is important for developing and optimizing plants for renewable biofuels. Schwender is a biochemist in the Lab's Biosciences Department, which, on August 1, will join a new department to be created with the Environmental and Climate Sciences Department.

"Jorg is an internationally recognized leader who continues to make substantial advances in methodology, both experimentally and computationally, and has applied these methodologies to deepen our understanding of plant metabolism," said Creighton Wirick, who was interim chair of the Biology Department at the time Schwender was nominated for tenure. "His unique contributions and collaborative efforts are key elements of a strong plant science program at Brookhaven and his efforts will continue to contribute substantially to DOE missions in reduced carbon feedstocks and biofuels production."

Schwender uses powerful computers and mathematical models to study plants' metabolic networks—the pathways of biochemical reactions where nutrients are converted into energy that plants need to survive and flourish. To simulate developing biomass synthesis for canola seed embryos, Schwender and postdoctoral research associate Jordan Hay constructed a comprehensive, computational model that contains 572 chemical reactions and encompasses nine different cellular organelles or compartments, has eight interfaces for transport or exchange with the environment, accounts for uptake of light as well as 11 nutrients, and allows for the free exchange of oxygen and carbon dioxide with the environment.

"Jorg's accomplishments in this area are extraordinary. He is one of the few scientists who creates a model and then tests it with in-vivo experiments in the same laboratory" said David Schlyer, the current chair of the Biosciences Department.

Schwender's additional accomplishments include discovering an unexpected biosynthetic pathway for the production of organic compounds, called "isoprenoids," with carbon derived directly from central metabolism. He then demonstrated that plant chloroplasts synthesize these compounds along this biosynthetic pathway. These results changed the prevalent view how the largest family of plant-specialized metabolites is synthesized.