In recognition of work on exotic materials including high-temperature superconductors 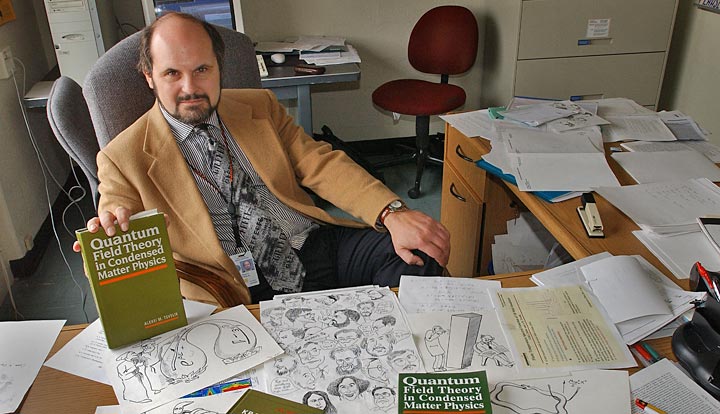 The award comes with €60,000 (about $80,000) in cash, and a seven-month stay at one or more German universities to conduct research. Tsvelik, who researches the theoretical underpinnings of a wide range of exotic material properties, said he plans to split the time between the University of Düsseldorf and Ludwig Maximilian University in Munich, and visit colleagues at several other universities. Since 1974, 11 other Brookhaven physicists have received the Humboldt prize.

“The Humboldt award is given as a recognition of life achievements in science,” Tsvelik said. “Naturally, when you receive such recognition you feel elated.”

Tsvelik’s theoretical research at Brookhaven has included topics related to the physics of strongly correlated systems, including metals with outer f-orbitals partially filled with electrons called heavy fermion materials, and low-dimensional systems such as insulating magnets and superconductors. Some of these materials and physics phenomena have already been applied in new types of electronic devices.

“Alexei is an expert in the area of strongly correlated electron physics,” said Chair of the Condensed Matter Physics and Materials Science Department Peter Johnson.  “This prestigious award acknowledges his worldwide recognition in this important research area.”

Tsvelik’s recent research has focused on studying the phase diagram of copper oxide high-temperature superconductors. Superconductivity, or the ability to transmit electric current without loss, is an example of a thermodynamic phase. Just like water changes phases from ice to liquid, or a piece of iron passes from a nonmagnetic to a magnetic state, some materials may become superconductors when the temperature drops below a certain threshold. In the case of the copper oxides, also called “cuprates,” this threshold is exceptionally higher than other superconducting materials, making them attractive for applications in new technology, but still cold enough to require cooling systems for them to operate as superconductors.

The mechanism responsible for superconductivity in the cuprates is not well understood, making it a challenge to determine how to increase their transition temperature for more practical everyday applications. A better understanding of this transition may help scientists design more effective superconductors that could overcome the need for cooling. That would make them more useful for applications in sustainable energy development, such as zero-energy-loss power-distribution lines.

Tsvelik plans to continue the quest for such understanding.

“Identifying one phase transition is just a step in a long process,” Tsvelik said. “Our knowledge becomes more and more detailed the longer we study it. You start with some vague notions, and you work to see all of the detailed mechanisms until you nail down everything.”

After earning an undergraduate degree from the Moscow Physical-Technical Institute in 1977, and a Ph.D. from the Kurchatov Institute for Atomic Energy in 1980, Tsvelik was a staff member of the Institute for High Pressure Physics, Moscow, from 1980 to 1982. He then worked for the Landau Institute for Theoretical Physics in Moscow until 1989. From 1992 to 2001, Tsvelik was also a lecturer and then professor at the University of Oxford, England. He joined Brookhaven as a senior physicist in 2001, and has served as an adjunct professor of physics at Stony Brook University. Tsvelik has authored more than 180 scientific publications, two books, and has been a fellow of the American Physical Society since 2003.

Tsvelik’s research is funded by the DOE Office of Science (BES).