Save the last photon for me!

That was the banner call on September 30, 2014, when the National Synchrotron Light Source (NSLS) at Brookhaven National Laboratory ended operations.

The 8 a.m. shift in the NSLS control started with a momentary power dip causing a beam dump and quick recovery in both the Vacuum Ultraviolet and X-Ray rings. Related to the power dip, an electrical component overheated and smoked, setting off a fire alarm. Operators noted these events in the logbook — not everyday occurrences, but routine since NSLS first began operating in 1982. This day, however, felt very different from all others over the past 32 years.

At 4 p.m., the facility shut down for the last time, a moment witnessed by hundreds of people gathered in NSLS, in conference rooms at NSLS-II, in offices around the Brookhaven campus, and from around the world. 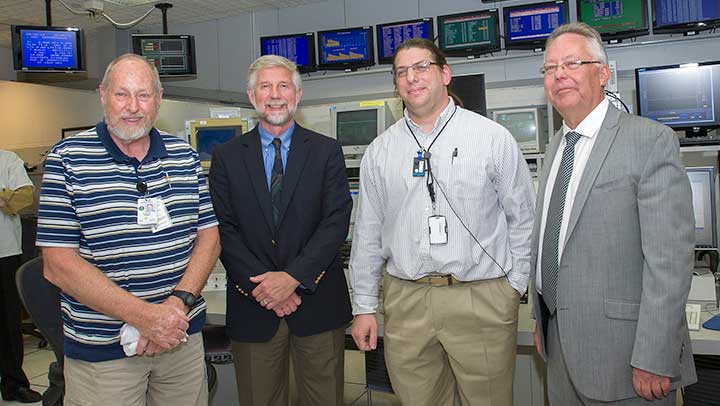 Inside the control room after the shutdown of the National Synchrotron Light Source. From left: Richard Heese, a senior physicist who designed the NSLS linac, commissioned the booster, and was the manager responsible for NSLS operations for many years; Steve Dierker, Associate Laboratory Director for Photon Sciences and NSLS-II Project Director; Gary Weiner, the final control room operator who shut down NSLS for the last time; and Brookhaven National Laboratory Director Doon Gibbs.

Associate Laboratory Director for Photon Sciences Steve Dierker and Laboratory Director Doon Gibbs spoke at a closing ceremony that was webcast live from the control room. Both recounted their personal experiences as NSLS users many years ago, Gibbs saying that he had joined the staff at Brookhaven because of NSLS. Dierker noted that more than 57,000 unique researchers have done countless experiments, leading to many significant discoveries and two Nobel Prizes.

They also talked about the sadness of the day tempered by the excitement of NSLS-II, which will be the newest and most advanced synchrotron facility in the world when it comes online later this year.

Dierker then directed all eyes to Gary Weiner, control room operator, who started the very deliberate process of shutting down NSLS.

Of course, the real action on September 30 — and for months leading up this day — was at the beamlines, where users from all over the world clustered at their work stations collecting their final data. Many were wearing commemorative T-shirts printed with the “save the last photon” text and the day’s date.

Jean Jordan-Sweet, IBM, said proprietary data were collected on beamline X20C about an hour before shutdown. At X20A, having done a tricky calculation, she finished taking a three-hour measurement just two minutes before the final photon streamed in. Success!

Partner users like IBM, the National Institute of Standards and Technology (NIST), Case Western Reserve University and many others have worked with NSLS to pioneer technical achievements in accelerator and beamline development, enabling superb service to the facility’s large user community. “That’s an important legacy here,” said Jordan-Sweet. “That special partnership between NSLS and the users has enabled such great science through the years.”

Former NSLS Chair (1995-2000) Michael Hart flew in from England to attend the closing events. He recounted in fiscal year 1997 when NSLS users and staff responded successfully to a question posed by the Department of Energy (DOE) about the consequences of shutting down one or more of the four synchrotron light sources the agency supported at the time. A DOE-commissioned panel, chaired by Robert Birgeneau, then Dean of Science at MIT, visited NSLS, held formal meetings and collected statistics. “The panel was impressed by our outstanding performance and concluded that NSLS must be supported at a higher level than before,” said Hart. “Now, after 32 years, it’s time to write up the history of the most successful and influential synchrotron light source in the world!” he declared.

By many measures, NSLS has been an outstanding scientific user facility. Here are stats from 1982-2014.

After the ceremony and shut down, Erik Johnson grabbed Kermit the Frog, a fixture in the NSLS control room, and headed out to deliver him to the NSLS-II control room. According to Johnson, Kermit’s signature line “It’s not easy being green” was linked to the colors displayed on a webpage for NSLS. “Green meant ‘go’ — all systems ready to operate,” explained Johnson, Photon Sciences deputy project director for NSLS-II. “That won’t happen any more at NSLS, so it’s time to move. And now, NSLS-II has permission to operate,” he added, referring to a recent milestone at the new facility.

Howard Robinson said, “Given what the day was for, I felt good at the end. There was a familiar sense of family, and I was happy to see so many folks from around the Lab joining the celebration.”

Robinson has been a beamline scientist with PXRR, the macromolecular crystallography beamline at NSLS, and, going forward, will help to coordinate construction of the partner beamlines at NSLS-II. These are a set of five beamlines funded by NIST, the New York Structural Biology Center and New York State, and Case Western Reserve University. Said Robinson, “While it’s sad that NSLS has closed, we are eager to develop the science at NSLS-II. The new facility has such potential to be even better."