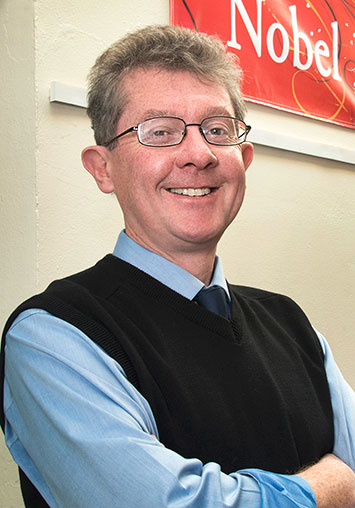 UPTON, NY—J.C. Séamus Davis, a physicist who explores the quantum quirks of high-temperature superconductors and other exotic materials at the U.S. Department of Energy’s Brookhaven National Laboratory and Cornell University, has been selected to receive a new grant from the Gordon and Betty Moore Foundation to delve further into the mysteries of quantum materials. As one of nineteen Moore Experimental Investigators in Quantum Materials selected “to pursue ambitious, high-risk research, including the development of new experimental techniques,” Davis will receive $1.8 Million over five years to explore new problems in quantum physics, to develop new techniques to probe the quantum matter in different kinds of materials, and possibly to delve into the quantum nature of space-time itself.

The grant is part of the foundation’s Emergent Phenomena in Quantum Systems (EPiQS) Initiative, which aims to facilitate scientific breakthroughs by giving some of the field’s most creative scientists the freedom to take risks and the flexibility for agile changes of research direction while providing them with an environment that encourages collaboration with other leading researchers.

“I’m extremely grateful for this opportunity to build on my previous work, and perhaps more importantly to explore new experimental approaches to study problems where conventional techniques cannot be used,” Davis said. “This grant will give our group the freedom to do things that might otherwise be regarded as too risky in terms of not having a specific discovery or payoff in mind. It will allow us to explore new frontiers in quantum matter and quantum physics.”

"This grant will ... allow us to explore new frontiers in quantum matter and quantum physics.”

Quantum materials are substances in which the collective behavior of the constituent elementary particles leads to extraordinary emergent properties, such as high-temperature superconductivity, topological superfluidity, and exotic forms of quantum magnetism. Though the Moore Foundation program does not focus on near-term applications, their announcement of these awards notes that discoveries in this field could eventually lead to revolutionary applications in electronics, computing, energy technology, and medical devices.

Said Davis, “The way I think about it and talk to my students about it is, if you are Christopher Columbus and you decide to move west, that’s a good plan. But if you have ideas about what you are going to discover, you are almost certainly going to be proved wrong. For best results, you just have to have an open mind when you explore new territory. That is the great benefit of these Moore Foundation EPiQS grants. They give scientists the freedom to investigate previously unexplored scientific vistas.”

One new territory Davis would like to explore is how to extend his electronic quantum matter visualization techniques to materials under extremely high magnetic fields, up to 25 or even 35 Tesla and beyond. Davis is famous for designing tools to do things others might have thought impossible—including a spectroscopic-imaging, scanning tunneling microscope that has revealed unprecedented details about high-temperature superconductors. He sees expanding this technique to new physical regimes such as extremely high magnetic fields as an instrumentation development challenge.

“There’s a whole lot of cryogenic engineering that needs to be done to try to make it happen. But tackling the challenge could reveal amazing new physics, such as new states of electronic matter.”

“Many of the most exotic and fundamental quantum states of nature that have been discovered in materials such as superconductors and topological insulators are not really confined to materials made of electrons. They occur also in other quantum systems made up of neutral particles. And those systems are just as important and just as profound as the electron systems,” he said.

One example is the superfluid Helium 3. “It is the only known topological superfluid, but so much about it still remains a mystery,” he said. Another example is the proposed “spin liquid” state that occurs in magnetic insulators that are prevented by quantum fluctuations from ordering into permanent magnets.

“In order to study these exotic forms of quantum matter you have to develop new techniques. When you’re not using electrons, there are no voltages and electrical currents to measure. You have to be clever about how you design the experiments,” he said.

And finally, Davis said he’d like to explore the quantum nature of space-time itself—the interwoven continuum of three physical dimensions plus time in which we all exist.

According to the Moore Foundation, Davis and the other investigators selected for these awards will become part of their EPiQS integrated research program, which includes experimental investigations, materials synthesis, theoretical research and a variety of collaboration- and community-building activities. Earlier this year, the Moore Foundation announced the winners of its competitions for Materials Synthesis Investigators, which included Brookhaven Lab physicist Ivan Bozovic, and Theory Centers.

Davis’ work at Brookhaven Lab is supported primarily by the DOE Office of Science (BES). The Moore Foundation grant will be awarded to him through his appointment at Cornell University.