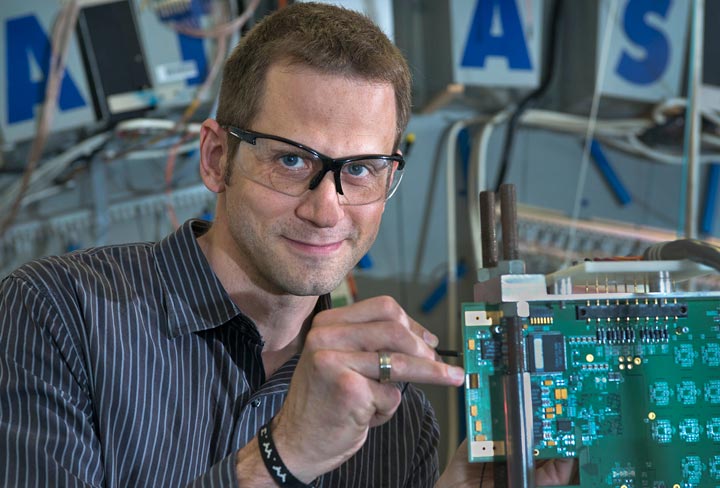 With the Kansas City Royals and San Francisco Giants squaring off for the 2014 World Series, the high-end cameras professional photographers at the games will use for razor-sharp photos weigh about 3.5 pounds and can shoot up to 14 photos per second. When high-energy protons face off for head-on collisions at the Large Hadron Collider (LHC) in Europe, physicists from Brookhaven Lab and 177 other institutions worldwide rely on the ATLAS detector, one of two detectors at the LHC used to discover the Higgs particle missing from the Standard Model theory that identifies all known elementary particles and explains how they interact. The state-of-the-art ATLAS "camera" weighs more than 15.4 million pounds and can snap 40 million "pictures" per second.

From all the ATLAS detector's photos taken among trillions of proton collisions in 2012, only 20 captured the process of two particles called W bosons scattering off one another. Physicists are using findings from these über-rare occurrences—and those to be identified in future collisions—to test the Standard Model theory and search for new physics while working to answer two questions people have asked for millennia: What is the world is made of and what holds it all together?

Join Marc-Andre Pleier of the Physics Department for the 498th Brookhaven Lecture, titled "Vector Boson Scattering: Watching the Higgs Boson at Work with the ATLAS Particle Detector," in Berkner Hall at 4 p.m. Wednesday, Oct. 22. All are invited to attend this free talk, which is open to the public. Refreshments will be offered before and after the lecture. Visitors to the Lab 16 and older must carry a photo ID while on site. Add to calendar

During his talk, Pleier will provide an overview of the Standard Model of fundamental particles and interactions as well as the Higgs discovery in 2012. He will then discuss how he and fellow ATLAS collaborators use the detector to search for "fingerprints" of the rare W-boson scattering process, flaws or breakdowns in the Standard Model, and potential areas to discover new physics.

To join Pleier for dinner at a restaurant off site after the talk, contact Linda Feierabend (Ext. 4887).

Pleier is one of approximately 50 scientists and technical staff members from Brookhaven Lab performing research using the ATLAS particle detector, one of four experiments at the LHC at CERN in Switzerland. Pleier’s focus at the Lab is two-fold: the analysis of the ATLAS data, hunting for new physics phenomena that might be hidden in the data, and preparing new components for the future upgrades of the ATLAS detector. Pleier received his Ph.D. in physics from the Ruprecht-Karls-University of Heidelberg in Germany in 2002. In 2003, he was awarded a Feodor Lynen Fellowship from the Alexander von Humboldt Foundation and was hosted by the University of Rochester to carry out research at the D-Zero experiment at Fermi National Accelerator Laboratory. Before joining Brookhaven Lab’s Physics Department in 2009, Pleier served at the University of Bonn, Germany, from 2005, researching at Fermilab and CERN while teaching at the university. In 2009, the University of Bonn awarded him a habilitation degree, the highest academic credential granted in European countries.