Chocolate, licorice, and lollipops on their way to U.S. Troops overseas

Sixth grade students from Riverhead's Pulaski Street Elementary School with their teacher, Cyndi Haverty (second row second from right), gather with members of Brookhaven Lab's AdoptaPlatoon (AaP) committee. These students won first place collecting 140 pounds of candy as part of a school candy competition that brought in a total of over 684 pounds of candy. AaP will ship the candy to U.S. troops deployed overseas.

The clamor heard in the hallway of the Pulaski Street Elementary School, matched by the apparent excitement of the fifth and sixth grade students, was a sure indicator that the students were eager to learn the results of their candy campaign. Over the past few days, these fifth and sixth grade students had collected and donated their Halloween candy for Brookhaven Lab’s AdoptaPlatoon (AaP) program. The Lab will ship the packages of candy to U.S. troops deployed overseas.

“We all figured that our soldiers miss home and the candy would make them smile.”

Said Pulaski sixth grader Liam McIntosh, “On Halloween, I kept coming home to empty my bucket of candy in to a really big bag. I know the troops will really like the candy so I even gave them my M&M’s, which are my favorite.”

The students’ candy campaign, which was a competition to see which class would bring in the most candy, was led by Pulaski’s sixth grade teacher Cyndi Haverty with help from Maryellen Braunreuther, a volunteer on the Lab’s AaP committee whose daughter Marissa is a sixth grader at the school. After all of the candy boxes were weighed, Haverty’s class swept first place weighing in 140.6 pounds of candy for the sixth grade, and Mr. Kanter’s class took the top spot for the fifth grade, weighing in 76 pounds of candy. In total, the students garnered more than 684 pounds of candy!

Fifth grade students from Riverhead's Pulaski Street Elementary School pictured with their teacher, Mr. Kanter (back row, center). These students took the top spot in the fifth grade by donating 76 pounds of candy that will be shipped by Brookhaven Lab's AdoptaPlatoon committee to U.S. troops deployed.

“This was a great exercise in engaging students in a spirited competition,” said Haverty. “It also helped to illustrate the importance of showing appreciation to those who are serving our nation. The kids made a small sacrifice for those who are sacrificing everything for our freedom. They did a great job and it was a huge success. The staff is already drumming up plans for next year!”

Marissa Braunreuther originally came up with the idea. “One day my mom was wearing her AaP tee shirt and was explaining to me how she and her co-workers get donations to send our soldiers,” said Marissa. “That’s when I came up with the idea of sending them Halloween candy. My teacher Ms. Haverty liked the idea too, so we made flyers and asked friends and neighbors to help. We all figured that our soldiers miss home and the candy would make them smile.” 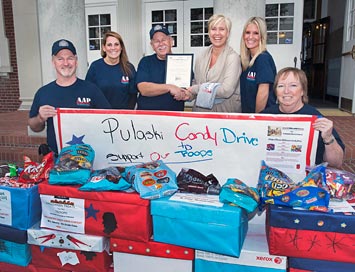 In addition to the candy drive at the school, Lab AaP volunteer Kelly Backofen of Creative Resources asked employees for candy donations. “I never expected to get such a response,” said Backofen. “The bags of candy kept coming and we have three big boxes stuffed to their brims that we will send to the troops along with the candy collected from the school. The continued support of employees for our AaP never ceases to amaze me.”

Bob Duffin, who leads Brookhaven’s AaP, said he is always pleasantly surprised at the generosity of local schools and community organizations.  “In addition to this candy drive, Cutchogue-East Elementary School and Mattituck High School are conducting a drive to gather general supplies needed by our troops,” said Duffin.  “I am retired from the Lab and this is the best way I can spend my time — working with the AaP committee to get our troops goodies and supplies from home.  I thank the Brookhaven Veterans Association, Lab employees and volunteers, and all of the people who make this possible.”

Brookhaven Lab’s AdoptaPlatoon program is a sub-committee of the Brookhaven Veterans Association (BVA). For information on how you can volunteer or to see a list of items needed for troops: http://www.bnl.gov/bera/activities/va/Adopt-A-Platoon/

For information on the Brookhaven Veterans Association, including their current “Wreaths Across America” campaign go to: http://www.bnl.gov/bera/activities/va/