The following profile was published by the Department of Energy's Office of Economic Impact and Diversity for the Women @ Energy series, which showcases women who are helping change the world, ensuring America’s security and prosperity through transformative science and technology solutions. Meet the other scientists profiled in the Women @ Energy series. 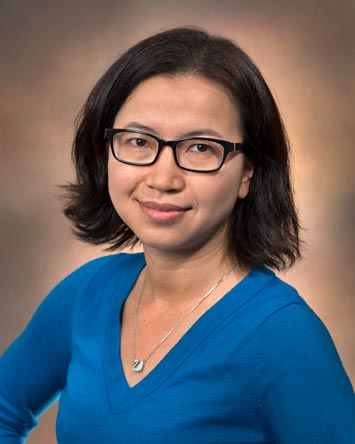 Meifeng Lin is a theoretical particle physicist and a computational scientist at the Computational Science Center of Brookhaven National Laboratory.

Meifeng Lin is a theoretical particle physicist and a computational scientist at the Computational Science Center of Brookhaven National Laboratory. Her research focuses on advancing scientific discovery through high performance computing. One such area of her focus is lattice gauge theory, in which large-scale Monte Carlo simulations of the strong interaction between the sub-atomic particles called quarks and gluons are performed to study fundamental symmetries of the universe and internal structure of hadronic matter. She obtained her Bachelor of Science degree in Physics from Peking University in Beijing, China. After getting her PhD in theoretical particle physics from Columbia University, she held postdoctoral positions at MIT, Yale University and Boston University. Prior to joining BNL in 2013, she was an assistant computational scientist at Argonne Leadership Computing Facility.

1) What inspired you to work in STEM?

I always like to solve problems and figure out how things work. Being a farm girl in a small village in China, I was very close to nature and had a lot of opportunities to see physics at work in the daily life, even though I didn’t realize it then. For example, in the starch making process, farmers would drain the water out of the barrels using the siphon principle. Such experiences fostered my curiosity and later on when I learned physics and could make such connections, I was quite fascinated. I guess I also inherited the “curiosity" genes from my parents, who, although did not have the chance to get much education, were always trying to figure out how things work and fix everything by themselves. My father, in particular, also accidentally cultivated my interest in math and logic through things like puzzles and Chinese chess when I was a little kid.

But the realization that I would like to work in STEM has been gradual and the fact that I do is more a happy accident than determination. There wasn’t an “aha” moment that made me decide to choose science as my career. Growing up, I always wanted to be a writer. Sort of by chance I was admitted to the Physics Department at Peking University. Once I started studying physics as a major, I grew to love the problem-solving aspects of it and was amazed by the mathematical simplicity of the laws of physics. Even more importantly, I saw intelligence, dedication and constant hunger for new knowledge in my professors and colleagues throughout the years.  And I enjoyed working and learning with them very much. I think that’s what got me to work in STEM eventually and stay with it.

2) What excites you about your work at the Energy Department?

Working in a field that strives to understand the most fundamental properties of our universe gives me this feeling that I am making a small contribution to the advancement of human knowledge, and that is very satisfying for me. At the Energy Department, I am surrounded by some of the smartest people and constantly exposed to new ideas and new technologies. It makes my work both challenging and exciting. Now that I am in an interdisciplinary research center, I am excited to have the opportunity to learn from my colleagues about their areas of interests and hopefully expand my research horizon.

3) How can our country engage more women, girls, and other underrepresented groups in STEM?

For young girls who are thinking about entering the field, some guidance and encouragement from the teachers, both male and female, will certainly help a great deal. When I was in high school, I had female teachers telling me that I just needed to marry well. But I was lucky to have several of my male teachers who saw my potential in math and physics and offered me very generous support and guided me through difficult times. Without them I would probably have followed a more stereotypical path for girls. This may be less an issue in the US now, but we still need to be careful not to typecast girls and minorities.

On the other hand, we need to have a more supportive system which can retain women and underrepresented groups already working in STEM. I almost gave up working in STEM at one point, because it was so hard to find a job in my field that would allow me and my husband to stay in one place—the notorious “two-body problem". I was fortunate enough to have some very understanding and supportive supervisors and colleagues. At both Boston University and Argonne, I was given the green light to work from home most of the time. I am immensely grateful for this arrangement, as it gave me the necessary transition to eventually get my current job which is close to where my husband works. Of course other people in STEM may have more constraints due to the nature of their work and don’t have the luxury of working remotely. But some flexibility and understanding will go a long way.

4) Do you have tips you'd recommend for someone looking to enter your field of work?

Take your time to find a field that interests and excites you. I always thought I wanted to be an experimental condensed matter physicist, but after a few summers in the labs, it turned out I did not like to do the experiments or be in the clean room. But I enjoyed writing computer programs to control the instruments or do simulations and data analysis. Then I found the field of lattice gauge theory where theoretical physics and supercomputers meet, which is perfect for me.

For lattice gauge theory, and for computational sciences in general, the requirements on both mathematical and computational skills are pretty high. So it is important to have a solid mathematical foundation from early on. Some experience with scientific computing will be helpful. It probably sounds harder than it really is. Just don’t expect to know everything from the beginning. Nobody does. A lot of the skills, especially programming skills, can be picked up and improved on the job. As long as this is something you are interested in, be passionate, persevere, and don't be afraid to ask for help.

5) When you have free time, what are your hobbies?

I enjoy reading, jogging, traveling and just checking out new neighborhoods with my husband. Occasionally when the mood strikes, I also like to write. I still hope someday I will be able to write a book or two. But with my first baby on the way, all this may change. Time will tell.