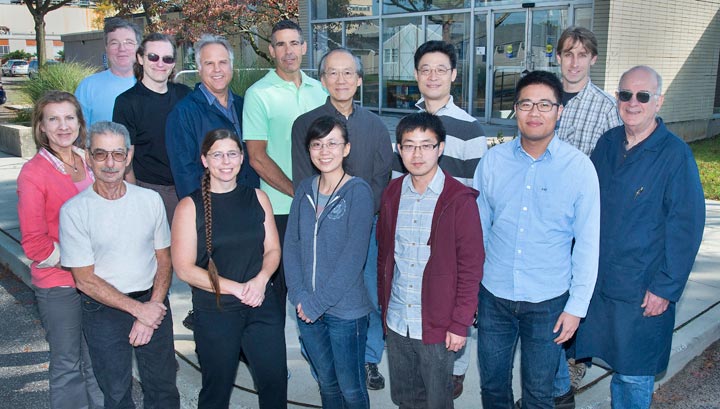 It was a race to the end. On September 30, 2014, when the last photons came through the shutter at the National Synchrotron Light Source (NSLS) on its final day of operations, the new diamond detector at beamline X28C resolved the images with 1,000-pixel resolution.

“Bittersweet, definitely,” said Jen Bohon, with the Case Center for Synchrotron Biosciences at Case Western Reserve University. She explained, “I purposefully scheduled this experiment at X28C to coincide with the NSLS shutdown — partly to make sure that we had the device ready to measure and partly to use our new detector to capture the last photons at the facility, which has been at the center of my world for the past decade.”

The diamond detector’s debut at NSLS was actually a successful pit stop on the way to NSLS-II, where it will be installed in beamline XFP, short for X-ray Footprinting. This beamline will enable studies of the structure and function of biological molecules in action, providing important insights into the activities of enzymes, proteins that carry particles through membranes, sensory receptors, and other vital systems in the body.

XFP is one of five partner beamlines at NSLS-II. Partner users receive a certain percent of the available beam time on a beamline in recognition of their contributions, which significantly enhance both NSLS-II beamline development and operations.

XFP was first proposed in 2010 by a team led by Mark Chance, who directs the Case Center for Synchrotron Biosciences. Because the group was faced with several technical challenges, starting with designing a window that would not melt in the high-flux beam coming from NSLS-II and finding a way to really measure the properties of that beam, Bohon turned to John Smedley, Instrumentation Division at Brookhaven. Smedley had earlier worked on diamond x-ray detectors with Jeff Keister, now in the Photon Sciences Directorate. Erik Muller of Stony Brook University (SBU) joined this effort, bringing on board SBU students and tapping into resources at Brookhaven’s Center for Functional Nanomaterials (CFN).

Said Muller, “Building on my experience in nanofabrication from grad-school days at Cornell and later as a postdoc at the nanocenter, I was using the CFN cleanroom facility to develop techniques for making patterns on these devices to enable various functionalities. When Jen came to us needing a transmission x-ray imaging detector, the design of the device became more complicated, and both the patterning process and the electronics readout capability became much more demanding. We added more students to the project to help.”

According to Muller, increasing the number of pixels puts demands on both the patterning and the electronics. “These diamonds are relatively small,” he explained, describing them as synthetic and about 0.02 carat (diamond “accents” in a ring are commonly 0.1 carat). “They need to be patterned on both sides with uniform features from the center to near the edges. We are not yet at the limit for small pixel size, but reducing the pixel size also reduces the signal per pixel. As we increase the pixel density, the electronics must follow suit, requiring lower noise, faster switching and faster readout.”

Why diamond? “Because diamond has some really fantastic properties,” answered Bohon. “It’s made of carbon, so there is very low x-ray absorption, critical in a device that has to transmit x-rays. It also has extremely high thermal conductivity and is radiation hard, so I don’t need to worry about it melting or degrading in the x-ray beam. Plus, it has excellent electrical performance, resulting in the ability to measure x-ray flux over a huge dynamic range.”

Why synthetic diamond? “Natural diamond has too much nitrogen in it, destroying the electronic properties that we need to use,” said Bohon. “Synthetic diamonds can be grown basically nitrogen-free.”

The diamond x-ray detector has shown real promise in meeting the needs of not only NSLS-II, but also synchrotrons worldwide.

Smedley summarized the team effort, which is supported by a grant from the National Science Foundation: “This has been a long-term project, involving students, three departments at Brookhaven, and two universities. I am very grateful to my colleagues in Instrumentation, who pushed very hard to enable us to meet the end-of-ops deadline. We had it ready for the end of NSLS operations and were successful in using that critical time to verify the performance of this detector that will be essential for NSLS-II.”