Taking Safety Into the Woods 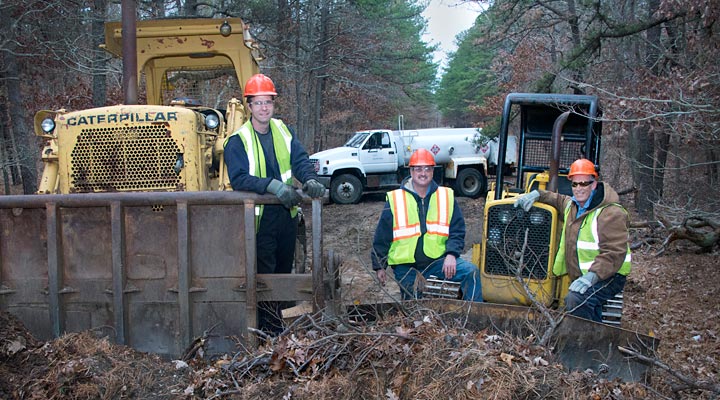 For 16 years, the Lab has opened its site in October to the New York Wildfire and Incident Management Academy (NYWIMA) for rigorous classroom and field training of emergency responders to wildland fires.

Each year, the Academy, sponsored by the New York State Department of Environmental Conservation (NYSDEC) in conjunction with the Central Pine Barrens Commission and other federal, state, county, and local organizations, provides over 300 courses in incident management, wildland firefighting, and prescribed fire to more than 6,800 emergency response personnel.

The responders spend more than a week on the Lab site, residing in dorms and attending classes in many locations across the site. They also spend many hours “in the field” for hands-on training given by qualified instructors from many organizations including Brookhaven Lab, U.S. Fish and Wildlife, New York State Office of Fire Prevention and Control, Fire Department of the City of New York, and Suffolk County Department of Fire, Rescue, and Emergency Services.

This year, the Academy offered a “Heavy Equipment Boss” training module and asked if it was possible for the Lab to send over heavy equipment machine operators (HEMO) with bulldozers to help the Academy instructors illustrate how to safely supervise heavy equipment during a fire and during wildland rehabilitation after a fire event, and the importance of making firebreaks — breaks in the tree line that help stop the spread of wildfires.

Kathy Schwager of the Lab’s Environmental Protection Division, the Lab’s primary liaison for the Academy, said she would see if it was possible to get the HEMO crew to help out.

“I called Ed Williams, a site resources manager in the Facility and Operations Directorate (F&O) and explained what the Academy was trying to accomplish,” said Schwager.  “After ensuring all safety protocols would be met, Ed told me the HEMO crew would be happy to help out. They were all extremely accommodating.”

Schwager then contacted James McNaughton, multi-trade supervisor in the Site Resources Division and they set the plan in motion. “This worked out perfectly,” said McNaughton. “We could help them with their training, and I used the opportunity to get our crew some extra training time on the equipment.  It was a win-win and we were happy to participate.”

In addition, the Site Resources Division also worked with leaders from the Academy to make sure the generators were always fueled at the Academy’s Incident Command Post, which was a large tent set up on the lawn outside of Berkner Hall.

Bill Fonda, who works for the NYSDEC and is the lead coordinator of the Academy, was very appreciative.

“The partnership we have with Brookhaven Lab is one of trust and reliability,” said Fonda. “We appreciate that the Lab opens its gates to us, as the many undeveloped acres on the Lab site makes it the perfect location to conduct important simulated and hands-on training for our emergency responders. We look forward to a continuing partnership that benefits everyone.” 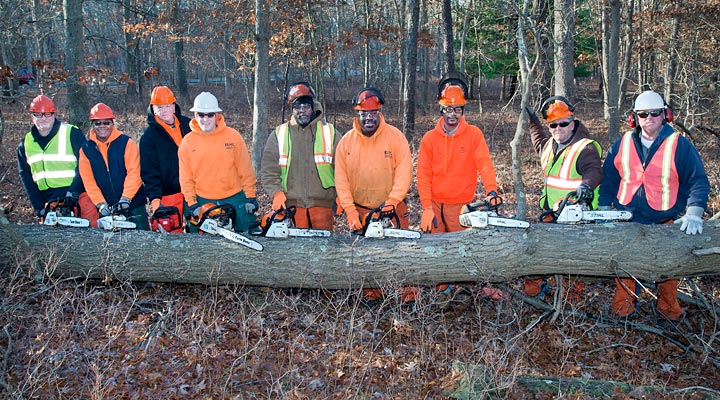 The New York Wildfire and Incident Management Academy, which has been held at the Lab for 16 years, welcomed the chainsaw crew from the Lab's Site Resources Division to their four-day training session providing important classroom and field training.

The Academy was offering an intensive four-day chainsaw training class that Chip Sullivan, the general supervisor for roads and masons, grounds and sanitation, HEMOs, and riggers in the Lab’s Site Resources Division, knew would be perfect for his crew.

“Anyone who uses a chainsaw at the Lab is required to pass a written and practical exam,” said Sullivan. “Some of our crew members needed refresher training and we also had some new employees, so I reached out to Kathy Schwager to find out if there was a chance the BNL crew could take the classes with the Academy attendees.  Without hesitation, the Academy welcomed our crew to their class.”

“These scenarios demonstrate how we can partner with outside organizations that benefit both parties,” added Associate Laboratory Director for F&O Amy Nunziata. “I know how highly trained and talented the F&O crews are and how difficult their work can be. This is yet another example of their understanding the importance of appropriate training and their high regard for safety. I applaud everyone involved from the Lab and the Academy for their hard work and dedication in helping each other, while staying focused on safety.”