Gearing Up for RHIC Run 15

By Jamie Dunlop and Wolfram Fischer 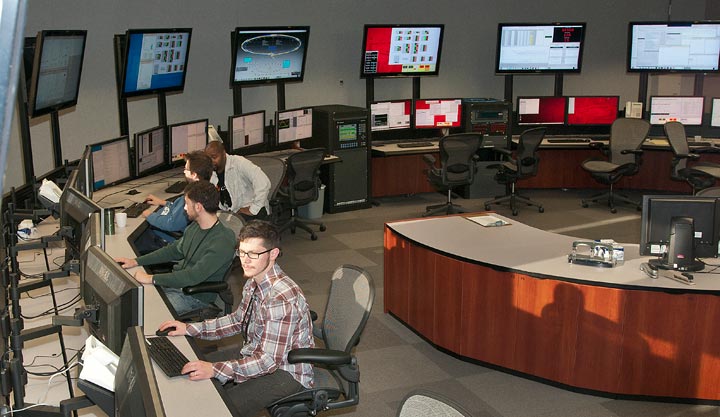 With the cooldown of superconducting magnets set to start in just a little over a week, the Relativistic Heavy Ion Collider (RHIC) is gearing up for its 15th year of physics operations in a run that will last 22 weeks.

Collisions between two medium-energy (100 billion-electron-volt, or GeV) beams of polarized protons should start on or around Feb. 13 and continue for the next nine weeks. The goal of these collisions is to increase the precision of our gluon polarization measurements, so we can better tease out their contribution to the overall spin of the proton, and to attempt to define and determine the reason why there is an imbalance in the way certain particles are deflected in one direction rather than another in transversely polarized proton-proton collisions.

Just like when a ball hits a spinning fan, when you collide a proton polarized transverse to its direction of travel with an unpolarized proton, there is a net deflection, an imbalance in the probability for a particle to go to the left versus to go to the right when, for example, the incoming proton's polarization axis faces up. The effect at RHIC is huge, with up to twice as many particles going to one side as opposed to the other. The source of this phenomenon is unclear, despite its strength and despite more than a decade of measurements, though it has been conjectured to have a connection with the orbital motion of the subcomponents of the proton, one of the largely unknown components for the total proton spin beyond the polarization of the gluon and quark subcomponents themselves.

After the initial nine-week part of the run, we’ll collide polarized protons with heavier ions for the first time at RHIC—first gold, for about five weeks, then a shorter two-week run with aluminum. Though we’ve previously collided larger deuterons with gold nuclei, the proton-gold collisions are a more precise probe of the conditions that exist within the heavy ions before they interact with other heavy ions to form quark-gluon plasma. These collisions will help us search for indications of gluon saturation—dense gluon fields predicted by theorists to exist in the nuclei and hinted at in results from the deuteron-gold collisions at RHIC and, more recently, from proton-lead collisions at the Large Hadron Collider. These studies will help us determine how the pre-collision conditions of the ions contribute to the findings we observe in gold-gold collisions and disentangle these initial-state effects from the final-state effects driven by the formation of quark-gluon plasma. They’ll also help us better understand the contribution of these gluon fields to proton spin.

A number of upgrades in advance of Run 15 promise more collisions than in previous years. For proton collisions, electron lenses were installed and commissioned with gold beams in the previous run. Basically, when protons pass by each other, their positive charges make the protons in one beam repel those in the other. The electron lenses use the attractive force of negatively charged electrons to compensate for this repulsive tendency and thereby allow for more stored protons.

With the electron lenses, larger number of protons can be stored, but these require additional upgrades. For example, the fast magnets that extract the beam needed a cooling system since the ever-increasing beam current started to heat them up. New protection masks for the experiments were installed in case the beams are lost in an uncontrolled way.

For higher gold intensities, the beam dump also needed an upgrade, and 12 magnets needed to be moved to accommodate the different beam trajectories. For Run 15, the magnets are now set in new configurations (“lattice”).

Both the PHENIX and STAR detectors have also been upgraded to make more incisive measurements, specifically of direct photons, which emerge directly from the collisions of the quarks and gluons that make up the protons and heavier ions without any interactions with the rest of the particles created in the collisions.

STAR and PHENIX have also installed novel detector technologies to help analyze the particles emerging from RHIC collisions in the forward direction—close to and along the direction of the beamline. PHENIX has pushed the boundaries of photon detection with a compact tungsten-silicon hybrid detector called the MPC-EX, an approximately $1 million project—using the high density of tungsten and the fine spatial resolution of silicon to separate very closely spaced particles.

In STAR we will have a preshower detector in front of the forward meson spectrometer, which is the first large-scale implementation at RHIC using next-generation silicon photomultipliers for the detection of scintillator light emitted by plastic scintillators, which create light when charged particles pass through them. This replaces a technology much like vacuum tubes that has been used for decades to precisely detect small amounts of light. Only recently has solid-state technology gotten to this point. This is the first test for this type of device at RHIC, which may be useful in other colliders, too, so this will benefit many machines and not just ours.