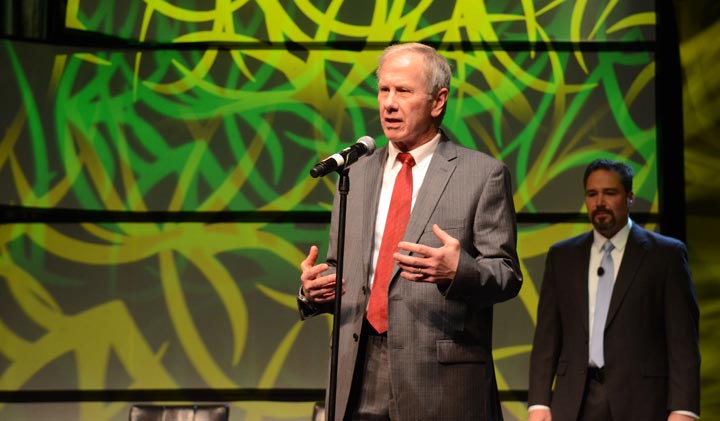 Tom Butcher speaking at the National Biodiesel Board award ceremony.

The National Biodiesel Board (NBB) recently honored Tom Butcher, an energy researcher at the U.S. Department of Energy’s Brookhaven National Laboratory, with a 2015 “Eye on Biodiesel” award in the Innovation category. Butcher was one of just five honorees this year recognized by NBB, the trade association representing the biodiesel industry in the United States. The awards were presented at the organization’s annual meeting in Fort Worth, Texas, January 19-22, 2015.

“The NBB and the industry broadly is taking a slow and cautious path to increasing the use of biodiesel.”

Butcher was recognized for playing “an instrumental role in the technical research” that led to the designation of six to 20 percent biodiesel blends as fuels. The citation credited his work documenting the positive field experience with biodiesel blends and providing the research background.

“Biodiesel has grown very rapidly as a fuel, with more than 1.8 billion gallons produced in the U.S. last year,” Butcher said.  “A lot of it is used for diesel engines, but there is also strong interest in using it for home heating systems. Home heating systems are a great application because they are technically simpler and cheaper than transportation diesel engines. “

The National Biodiesel Board works to clear barriers to deployment and widespread adoption of biodiesel, which was first used in 1993. At Brookhaven, NBB sponsors Butcher’s research to help identify and understand the technical barriers to using biodiesel in home heating systems.

“The NBB and the industry broadly is taking a slow and cautious path to increasing the use of biodiesel,” Butcher said.

In 2008, five-percent blends were formally approved by ASTM International as 100 percent compatible with home heating systems that use oil. The next step, which was just accomplished, was to define a new fuel for home heating — a blend of anywhere from six to 20 percent biodiesel.  Brookhaven Lab performed most of the work required to make the technical case for the designation.

“Through that research, we demonstrated the technical feasibility, which helped support the vote in favor of defining this new fuel,” Butcher said.

The next progression will be complete replacement of petroleum by biofuels, so Butcher and his team are turning their attention to the technical issues associated with that advance and the research needed to support it. The work will be similar in nature to what they’ve done before, but materials compatibility will be a primary focus.

Butcher believes that approval of 100 percent biodiesel is “absolutely a possibility” and he expects the process to take around five years.

“Some companies are already displacing petroleum completely with biodiesel on a commercial basis now,” Butcher said.  “It’s very limited in scope and they’re operating outside of existing standards, but I think it helps encourage the feasibility of doing it. The limited amount of experience that folks have had on the piloting level have been very encouraging, and I think we can get there.

“The thing that really is important to this industry is that we got this new fuel defined, “ he said.  “That is the technical accomplishment that is most important for them.  Now manufacturers know the specifications and can develop and get approval for equipment using those specifications. So the existence of this new fuel definition enables manufacturers to start producing equipment that can use it with formal approval. I think that as time goes on, the available equipment will all change over to being fully compatible with this new fuel, so we’ve in essence started the process that will lead to this equipment changeover. It’s hard to change the world, and this is an important step.”