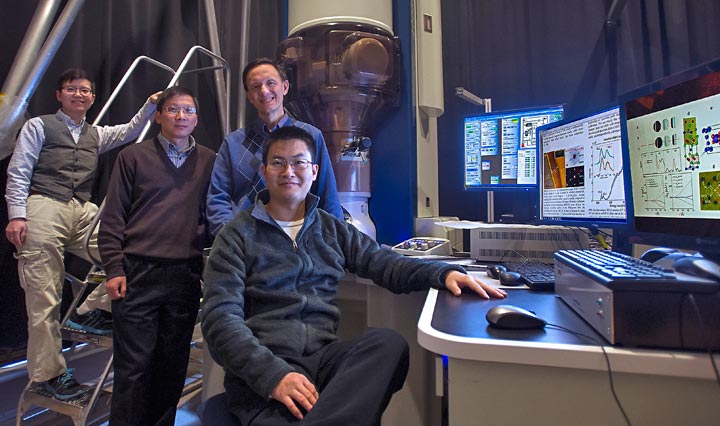 Scientists have measured the subatomic intricacies of an exotic phenomenon first predicted more than 60 years ago. This so-called van Vleck magnetism is the key to harnessing the quantum quirks of topological insulators—hybrid materials that are both conducting and insulating—and could lead to unprecedented electronics.

“Synthesis and characterization techniques have finally caught up to seminal theoretical work, and we are thrilled to have performed this groundbreaking research.”

“Our experiment is the first to show conclusive evidence of van Vleck magnetism, which mediates the magnetic properties of topological insulators,” said MIT and Brookhaven Lab Ph.D. student Mingda Li, lead author on the study. “Synthesis and characterization techniques have finally caught up to seminal theoretical work, and we are thrilled to have performed this groundbreaking research.” 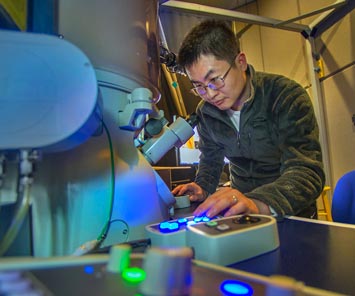 Classical materials tend to conduct electricity or insulate against it—think rubber versus copper. Topological insulators, however, live in both worlds: the bulk is insulating, but the surface is highly conductive. The relationship between these competing qualities introduces strange phenomena, especially in the surface electrons.

“The surface electrons—called Dirac electrons—exhibit the light-like mobility and extreme stability that enables so many exciting potential applications,” Li said. “But these electrons cannot be controlled directly. That’s where van Vleck magnetism comes in, to induce and harness Dirac electrons.”

Imagine an endless game of volleyball between perfectly matched opponents. Now replace the players with magnetic ions and the ball with a free electron—that interplay mirrors magnetism in traditional semiconductors. Interrupting the game or shifting the behavior of that free electron, which is key to semiconductor applications, is a relatively simple task.

In topological insulators, however, that volleyball game never gets going. The magnetic action is contained within a single crystal structure—no back-and-forth and no free electrons. This subtle, intra-atomic magnetism behaves like a lone player engaging in a virtual volley. In fact, a rogue volleyball (free electron) would ruin the game.

“Those all-important outer electrons can only be influenced through the topological insulator’s core electrons,” Li said. “The outer electrons can ‘feel’ the effect of energy or magnetic fields on the core. That conversation between core and shell is mediated by van Vleck magnetism.”

John Hasbrouck van Vleck, considered the father of modern magnetism, won the 1977 Nobel Prize in Physics for his quantum revisions of magnetism theory. His groundbreaking work included predicting this internal magnetism, which has been notoriously difficult to detect—until now. 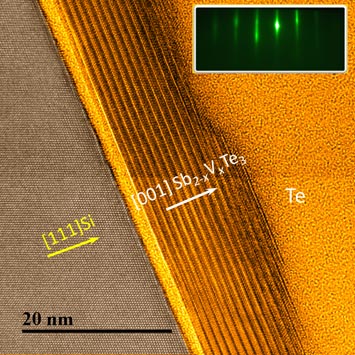 Topological insulators are typically synthesized one atomic layer at a time through a process called molecular beam epitaxy (MBE). For this study, MIT scientists used MBE to build an antimony-tellurium topological insulator (Sb3Te3) with added vanadium.

“Vanadium-doping increased the signal of electrons changing energy levels within the material,” said coauthor Yimei Zhu, a senior scientist at Brookhaven Lab and Li’s co-supervisor. “Layering these materials in three-dimensional crystals is one of the most exciting frontiers in materials science—tiny changes to the composition or arrangement can radically impact performance.”

The team struck the topological insulator with an electron beam focused to within one atom inside a state-of-the-art transmission electron microscope (TEM). This beam excited a core electron, which in turn raised the energy in the outer Dirac shell. Then, using a technique called electron energy loss spectroscopy (EELS), the scientists measured the difference in energy between the incident electron beam and the electrons that scatter out of the sample after impact. The energy lost revealed the van Vleck effect in action.

Harnessing the novel, quantum qualities of topological insulators could revolutionize both conventional and unconventional devices.

Silicon-based electronics often suffer from backscattering, when flowing electrons meet resistance and bounce back toward their source. The light-like electrons on a topological insulator’s surface, however, powerfully resist backscattering and can be used as a superior building block for semiconductor devices.

Spintronic devices manipulate the quantum spin of electrons to read and write digital information with superior efficiency, storage density, and stability—but the technology is in its infancy. The spin of the outer electrons in topological insulators is locked to their momentum, making them much more stable and secure against external forces.

Most quantum computer designs rely on an entangled pair of particles, suspended in a precarious superposition that transcends the binary system of traditional devices. But entangled particles are notoriously sensitive, prone to collapsing at the slightest provocation. Topological insulators, however, can support so-called Majorana fermions—entangled quasiparticles with far superior stability—which could be used for secure, error-corrected quantum computation.

“We needed extraordinary spatial and energy resolution,” Li said. “But the real challenge was achieving that precision at extremely low temperatures—that’s what distinguishes Brookhaven’s instrument and expertise.”

“When Mingda learned we could do precise EELs work at 10 Kelvin, where atomic drift is a major obstacle, he knew this was a perfect opportunity to tackle van Vleck magnetism,” Zhu said. “It was an ingenious idea on his part.”

This study marks the fourth scientific publication from Zhu and Li’s ongoing collaboration.

“Mingda is a very bright and independent student with many new ideas for research,” Zhu added. “He persuasively initiated the MIT-Brookhaven collaborations after listening to my talk at a conference more than three years ago. I became his thesis co-supervisor, along with Professor Ju Li at MIT, and Mingda frequently visits Brookhaven to take advantage of our facilities and expertise.”

Li is expected to graduate in May, and will take a postdoc position at MIT doing scanning tunneling microscopy. Li will focus on exotic properties of topological materials and their device applications—many discoveries remain before commercial deployment becomes possible.

“Elemental doping, like we did with vanadium here, is one way to induce van Vleck magnetism,” Li said. “But we haven’t investigated the proximity effect, where adjacent elements influence the core electrons. We also expect to find new phases of matter at the interface between topological insulators and other materials. It’s a very exciting time to be exploring these materials.”

Other authors on the study include Cui-Zu Chang, Jagadeesh S. Moodera, and Ju Li of MIT; Lijun Wu and Jing Tao of Brookhaven Lab; and Weiwei Zhao and Moses H. W. Chan of Pennsylvania State University.

The work at Brookhaven National Laboratory was supported by the Office of Science of the U.S. Department of Energy (DOE).

The Office of Science is the single largest supporter of basic research in the physical sciences in the United States, and is working to address some of the most pressing challenges of our time.  For more information, please visit science.energy.gov.