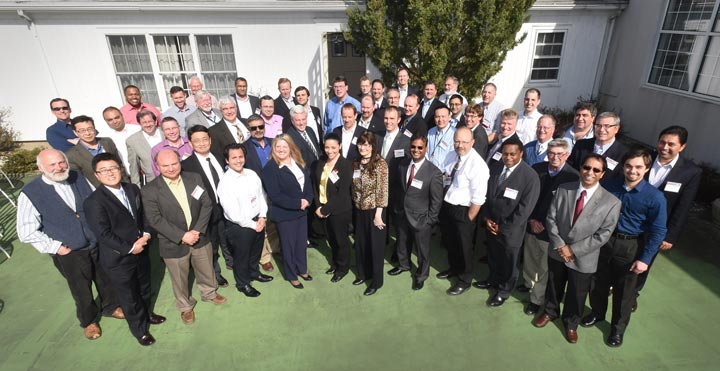 A key initiative to enable this is New York State’s Reforming the Energy Vision (REV) program, designed to make the state’s electricity market more efficient, and the system more resilient and flexible.

“The New York REV process represents the biggest change in electricity markets in the United States since deregulation, “ said Brookhaven’s Pat Looney, whose Sustainable Energy Technologies Department hosts the Smart Grid workshops. “ It’s a once-in-a-generation change and it will fundamentally alter the way the electricity markets are structured.”

Currently, power is auctioned on what’s known as the bulk power market—very large amounts of electricity being bought and sold. But NY REV proposes to build markets at the distribution level so that utilities would effectively be operators of electricity markets. Under the New York REV vision, utilities would design and construct retail markets in their service territories where electricity will be bought and sold, and customers will be able to be active participants in the market — building greater customer choice. Brookhaven Lab will help to develop tools to support the NY REV initiative.

Incorporating distributed energy resources like solar and wind farms and energy storage systems into the grid will allow power sources to be located close to the loads they are intended to serve, which will allow utilities to be more flexible.

“This is an innovative step that could spread across the whole country as states start to develop the new Smart Grid,” said Renewable Energy Group Leader Bob Lofaro. “Policymakers and utilities are going to be looking at how to use the distribution level more effectively and if this is successful in New York, it could be used as a paradigm across the country.”

A decentralized grid will also allow for the creation of more microgrids, a cornerstone of most grid resiliency efforts. Microgrids are localized groupings of electricity generation, energy storage, and loads, an alternative to the traditional centralized grid, and can be of enormous value in emergency situations. For example, when Superstorm Sandy hit Long Island, Stony Brook Hospital and University “islanded,” becoming a microgrid able to stand up and maintain operations at both the hospital and on the campus.

New York Prize is a New York State initiative to encourage communities to explore building their own microgrids. It will be the biggest single investment in microgrids anywhere, aiming to develop a series of microgrids to demonstrate their feasibility and advantages. Community microgrids could help to make the macrogrid more resilient and reliable because if there were a problem on the big grid, communities could disconnect and keep operating independently. The NY Prize initiative will fund community feasibility studies to see if it makes sense to build microgrids in particular areas.

To assist in the NY Prize effort, Brookhaven Lab’s Jae Sung Jung will be performing studies using the Distributed Energy Resources Customer Adoption Model (DER-CAM).  This tool, developed at Lawrence Berkeley National Lab with funding provided by DOE’s Office of Electricity Delivery and Energy Reliability, will tell communities what combination and amounts of resources in a microgrid will minimize costs, emissions, or a combination of both. As communities are funded for the feasibility studies, Brookhaven will work with them to conduct a DER-CAM analysis.

While developing capabilities to use the DER-CAM tool, Brookhaven researchers used the Brookhaven Lab site as a test case.

“To make the site operate as a microgrid, you need generation that will provide electricity to support all the loads at Brookhaven,” Lofaro said.  “There are a number of ways you can generate power: you can have diesel generators, a solar or wind farm, or a conventional power plant. How do you decide which ones you want to use and how much of each? For this particular study, we assumed we would want solar generation, an energy storage battery that would help store energy from solar, and we would use some diesel generators. And with those three things, we could operate as a microgrid and provide all the power we needed.

“So how much of each do we need?” Lofaro said. “We used DER-CAM to figure that out. It models all the loads that would be in the microgrid and it optimizes the mix of resources based on cost, emissions, or performance—or a combination of these.”

Since Brookhaven inaugurated the series of Smart Grid workshops in 2011, they have expanded their reach considerably.

“We started out with a very local set of participants,” Looney said. “Long Island, some of the utilities in New York City, and Orange and Rockland Utilities up the Hudson. But now we’re seeing participation from New Jersey — the director of the NJ Department of Homeland Security came to speak, we’ve had the Resilience Bank of New Jersey and New Jersey policymakers coming to engage in this meeting. Connecticut Power and Light also came and gave a presentation. So we’ve seen a broadening over time to a more regional flavor, but we’re also seeing entities from across the country. We now have regular participation from the Department of Energy and from many of the other National Labs, including Idaho, Los Alamos, and Sandia. So it’s really taking off from being just a local meeting on resilience to a forum for broader discussions on resilience in the Northeast and across the country.”

The next Resilient Smart Grid workshop will be held in October.